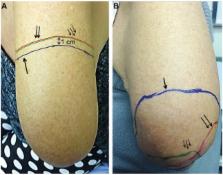 The aim of this study was to measure the efficacy of a single 60 min application of capsaicin 8% patch in reducing chronic amputation stump and phantom limb pain, associated hypersensitivity with quantitative sensory testing, and changes in brain cortical maps using functional MRI (fMRI) scans.

A capsaicin 8% patch (Qutenza) treatment study was conducted on 14 patients with single limb amputation, who reported pain intensity on the Numerical Pain Rating Scale ≥4/10 for chronic stump or phantom limb pain. Pain assessments, quantitative sensory testing, and fMRI (for the lip pursing task) were performed at baseline and 4 weeks after application of capsaicin 8% patch to the amputation stump. The shift into the hand representation area of the cerebral cortex with the lip pursing task has been correlated with phantom limb pain intensity in previous studies, and was the fMRI clinical model for cortical plasticity used in this study.

The results show that capsaicin 8% patch treatment leads to significant reduction in chronic pain and, particularly, in the area of stump hypersensitivity, which may enable patients to wear prostheses, thereby improving mobility and rehabilitation. Phantom limb pain (“central” pain) and associated brain plasticity may be modulated by peripheral inputs, as they can be ameliorated by the peripherally restricted effect of the capsaicin 8% patch.

R Melzack (1987)
A short form of the McGill Pain Questionnaire (SF-MPQ) has been developed. The main component of the SF-MPQ consists of 15 descriptors (11 sensory; 4 affective) which are rated on an intensity scale as 0 = none, 1 = mild, 2 = moderate or 3 = severe. Three pain scores are derived from the sum of the intensity rank values of the words chosen for sensory, affective and total descriptors. The SF-MPQ also includes the Present Pain Intensity (PPI) index of the standard MPQ and a visual analogue scale (VAS). The SF-MPQ scores obtained from patients in post-surgical and obstetrical wards and physiotherapy and dental departments were compared to the scores obtained with the standard MPQ. The correlations were consistently high and significant. The SF-MPQ was also shown to be sufficiently sensitive to demonstrate differences due to treatment at statistical levels comparable to those obtained with the standard form. The SF-MPQ shows promise as a useful tool in situations in which the standard MPQ takes too long to administer, yet qualitative information is desired and the PPI and VAS are inadequate.

Sutherland K. Maciver,  D Lloyd,  Maeve Kelly … (2008)
Using functional MRI (fMRI) we investigated 13 upper limb amputees with phantom limb pain (PLP) during hand and lip movement, before and after intensive 6-week training in mental imagery. Prior to training, activation elicited during lip purse showed evidence of cortical reorganization of motor (M1) and somatosensory (S1) cortices, expanding from lip area to hand area, which correlated with pain scores. In addition, during imagined movement of the phantom hand, and executed movement of the intact hand, group maps demonstrated activation not only in bilateral M1 and S1 hand area, but also lip area, showing a two-way process of reorganization. In healthy participants, activation during lip purse and imagined and executed movement of the non-dominant hand was confined to the respective cortical representation areas only. Following training, patients reported a significant reduction in intensity and unpleasantness of constant pain and exacerbations, with a corresponding elimination of cortical reorganization. Post hoc analyses showed that intensity of constant pain, but not exacerbations, correlated with reduction in cortical reorganization. The results of this study add to our current understanding of the pathophysiology of PLP, underlining the reversibility of neuroplastic changes in this patient population while offering a novel, simple method of pain relief.