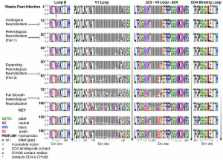 Current HIV-1 vaccines elicit strain-specific neutralizing antibodies. However, cross-reactive neutralizing antibodies arise in ~20% of HIV-1-infected individuals, and details of their generation could provide a roadmap for effective vaccination. Here we report the isolation, evolution and structure of a broadly neutralizing antibody from an African donor followed from time of infection. The mature antibody, CH103, neutralized ~55% of HIV-1 isolates, and its co-crystal structure with gp120 revealed a novel loop-based mechanism of CD4-binding site recognition. Virus and antibody gene sequencing revealed concomitant virus evolution and antibody maturation. Notably, the CH103-lineage unmutated common ancestor avidly bound the transmitted/founder HIV-1 envelope glycoprotein, and evolution of antibody neutralization breadth was preceded by extensive viral diversification in and near the CH103 epitope. These data elucidate the viral and antibody evolution leading to induction of a lineage of HIV-1 broadly neutralizing antibodies and provide insights into strategies to elicit similar antibodies via vaccination.

James Higgins,  A Wilm,  Lorraine Gibson … (2007)
The Clustal W and Clustal X multiple sequence alignment programs have been completely rewritten in C++. This will facilitate the further development of the alignment algorithms in the future and has allowed proper porting of the programs to the latest versions of Linux, Macintosh and Windows operating systems. The programs can be run on-line from the EBI web server: http://www.ebi.ac.uk/tools/clustalw2. The source code and executables for Windows, Linux and Macintosh computers are available from the EBI ftp site ftp://ftp.ebi.ac.uk/pub/software/clustalw2/