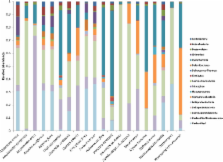 Sponges (Porifera) can host diverse and abundant communities of microbial symbionts that make crucial contributions to host metabolism. Although these communities are often host-specific and hypothesized to co-evolve with their hosts, correlations between host phylogeny and microbiome community structure are rarely tested. As part of the Earth Microbiome Project (EMP), we surveyed the microbiomes associated with 20 species of tropical marine sponges collected over a narrow geographic range. We tested whether (1) univariate metrics of microbiome diversity displayed significant phylogenetic signal across the host phylogeny; (2) host identity and host phylogeny were significant factors in multivariate analyses of taxonomic and phylogenetic dissimilarity; and (3) different minimum read thresholds impacted these results. We observed significant differences in univariate metrics of diversity among host species for all read thresholds, with strong phylogenetic signal in the inverse Simpson's index of diversity ( D). We observed a surprisingly wide range of variability in community dissimilarity within host species (4–73%); this variability was not related to microbial abundance within a host species. Taxonomic and phylogenetic dissimilarity were significantly impacted by host identity and host phylogeny when these factors were considered individually; when tested together, the effect of host phylogeny was reduced, but remained significant. In our dataset, this outcome is largely due to closely related host sponges harboring distinct microbial taxa. Host identity maintained a strong statistical signal at all minimum read thresholds. Although the identity of specific microbial taxa varied substantially among host sponges, closely related hosts tended to harbor microbial communities with similar patterns of relative abundance. We hypothesize that microbiomes with low D might be structured by regulation of the microbial community by the host or by the presence of competitively dominant symbionts that are themselves under selection for host specificity.

Simon Blomberg,  Anthony Ives,  Theodore Garland (2003)
The primary rationale for the use of phylogenetically based statistical methods is that phylogenetic signal, the tendency for related species to resemble each other, is ubiquitous. Whether this assertion is true for a given trait in a given lineage is an empirical question, but general tools for detecting and quantifying phylogenetic signal are inadequately developed. We present new methods for continuous-valued characters that can be implemented with either phylogenetically independent contrasts or generalized least-squares models. First, a simple randomization procedure allows one to test the null hypothesis of no pattern of similarity among relatives. The test demonstrates correct Type I error rate at a nominal alpha = 0.05 and good power (0.8) for simulated datasets with 20 or more species. Second, we derive a descriptive statistic, K, which allows valid comparisons of the amount of phylogenetic signal across traits and trees. Third, we provide two biologically motivated branch-length transformations, one based on the Ornstein-Uhlenbeck (OU) model of stabilizing selection, the other based on a new model in which character evolution can accelerate or decelerate (ACDC) in rate (e.g., as may occur during or after an adaptive radiation). Maximum likelihood estimation of the OU (d) and ACDC (g) parameters can serve as tests for phylogenetic signal because an estimate of d or g near zero implies that a phylogeny with little hierarchical structure (a star) offers a good fit to the data. Transformations that improve the fit of a tree to comparative data will increase power to detect phylogenetic signal and may also be preferable for further comparative analyses, such as of correlated character evolution. Application of the methods to data from the literature revealed that, for trees with 20 or more species, 92% of traits exhibited significant phylogenetic signal (randomization test), including behavioral and ecological ones that are thought to be relatively evolutionarily malleable (e.g., highly adaptive) and/or subject to relatively strong environmental (nongenetic) effects or high levels of measurement error. Irrespective of sample size, most traits (but not body size, on average) showed less signal than expected given the topology, branch lengths, and a Brownian motion model of evolution (i.e., K was less than one), which may be attributed to adaptation and/or measurement error in the broad sense (including errors in estimates of phenotypes, branch lengths, and topology). Analysis of variance of log K for all 121 traits (from 35 trees) indicated that behavioral traits exhibit lower signal than body size, morphological, life-history, or physiological traits. In addition, physiological traits (corrected for body size) showed less signal than did body size itself. For trees with 20 or more species, the estimated OU (25% of traits) and/or ACDC (40%) transformation parameter differed significantly from both zero and unity, indicating that a hierarchical tree with less (or occasionally more) structure than the original better fit the data and so could be preferred for comparative analyses.

Ecological diversity and its mesasurement

Surviving in a marine desert: the sponge loop retains resources within coral reefs.

Jasper M. de Goeij,  Dick van Oevelen,  Mark Vermeij … (2013)
Ever since Darwin's early descriptions of coral reefs, scientists have debated how one of the world's most productive and diverse ecosystems can thrive in the marine equivalent of a desert. It is an enigma how the flux of dissolved organic matter (DOM), the largest resource produced on reefs, is transferred to higher trophic levels. Here we show that sponges make DOM available to fauna by rapidly expelling filter cells as detritus that is subsequently consumed by reef fauna. This "sponge loop" was confirmed in aquarium and in situ food web experiments, using (13)C- and (15)N-enriched DOM. The DOM-sponge-fauna pathway explains why biological hot spots such as coral reefs persist in oligotrophic seas--the reef's paradox--and has implications for reef ecosystem functioning and conservation strategies.

This article was submitted to Aquatic Microbiology, a section of the journal Frontiers in Microbiology.