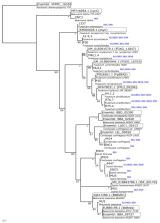 Fungi from the Hypocreales order synthesize a range of toxic non-ribosomal cyclic peptides with antimicrobial, insecticidal and cytotoxic activities. Entomopathogenic Beauveria, Isaria and Cordyceps as well as phytopathogenic Fusarium spp. are known producers of beauvericins (BEAs), beauvenniatins (BEAEs) or enniatins (ENNs). The compounds are synthesized by beauvericin/enniatin synthase (BEAS/ESYN1), which shows significant sequence divergence among Hypocreales members. We investigated ENN, BEA and BEAE production among entomopathogenic ( Beauveria, Cordyceps, Isaria) and phytopathogenic ( Fusarium) fungi; BEA and ENNs were quantified using an LC-MS/MS method. Phylogenetic analysis of partial sequences of putative BEAS/ ESYN1 amplicons was also made. Nineteen fungal strains were identified based on sequence analysis of amplified ITS and tef-1α regions. BEA was produced by all investigated fungi, with F. proliferatum and F. concentricum being the most efficient producers. ENNs were synthesized mostly by F. acuminatum, F. avenaceum and C. confragosa. The phylogeny reconstruction suggests that ancestral BEA biosynthesis independently diverged into biosynthesis of other compounds. The divergent positioning of three Fusarium isolates raises the possibility of parallel acquisition of cyclic depsipeptide synthases in ancient complexes within Fusarium genus. Different fungi have independently evolved NRPS genes involved in depsipeptide biosynthesis, with functional adaptation towards biosynthesis of overlapping yet diversified metabolite profiles.

Marika Jestoi (2007)
The contamination of foods and feed with mycotoxins is a commonly known problem. Intense investigations have been conducted to study the occurrence, toxicity, and recently also the prevention and detoxification strategies of mycotoxins in human and animal food chains. Most of the studies have emphasized on "traditional" mycotoxins, such as aflatoxins, ochratoxin A, and trichothecenes. However, one of the most common grain-contaminating genus of fungi, Fusarium spp., is also capable of producing other toxic secondary metabolites - the so-called emerging mycotoxins such as fusaproliferin, beauvericin, enniatins, and moniliformin. So far, only limited data is available on these metabolites. This is not only due to their late recognition but especially the late understanding of their role as mycotoxins. This paper summarizes the existing data on the chemistry, analytical techniques, biosynthesis, production, toxicity, and occurrence data on fusaproliferin, beauvericin, enniatins, and moniliformin. Based on the available studies, attention should be paid to the studies on the distinct significance of these compounds in the human and animal food chains.

Kathryn Bushley,  B. Turgeon (2010)
Background Nonribosomal peptide synthetases (NRPSs) are multimodular enzymes, found in fungi and bacteria, which biosynthesize peptides without the aid of ribosomes. Although their metabolite products have been the subject of intense investigation due to their life-saving roles as medicinals and injurious roles as mycotoxins and virulence factors, little is known of the phylogenetic relationships of the corresponding NRPSs or whether they can be ranked into subgroups of common function. We identified genes (NPS) encoding NRPS and NRPS-like proteins in 38 fungal genomes and undertook phylogenomic analyses in order to identify fungal NRPS subfamilies, assess taxonomic distribution, evaluate levels of conservation across subfamilies, and address mechanisms of evolution of multimodular NRPSs. We also characterized relationships of fungal NRPSs, a representative sampling of bacterial NRPSs, and related adenylating enzymes, including α-aminoadipate reductases (AARs) involved in lysine biosynthesis in fungi. Results Phylogenomic analysis identified nine major subfamilies of fungal NRPSs which fell into two main groups: one corresponds to NPS genes encoding primarily mono/bi-modular enzymes which grouped with bacterial NRPSs and the other includes genes encoding primarily multimodular and exclusively fungal NRPSs. AARs shared a closer phylogenetic relationship to NRPSs than to other acyl-adenylating enzymes. Phylogenetic analyses and taxonomic distribution suggest that several mono/bi-modular subfamilies arose either prior to, or early in, the evolution of fungi, while two multimodular groups appear restricted to and expanded in fungi. The older mono/bi-modular subfamilies show conserved domain architectures suggestive of functional conservation, while multimodular NRPSs, particularly those unique to euascomycetes, show a diversity of architectures and of genetic mechanisms generating this diversity. Conclusions This work is the first to characterize subfamilies of fungal NRPSs. Our analyses suggest that mono/bi-modular NRPSs have more ancient origins and more conserved domain architectures than most multimodular NRPSs. It also demonstrates that the α-aminoadipate reductases involved in lysine biosynthesis in fungi are closely related to mono/bi-modular NRPSs. Several groups of mono/bi-modular NRPS metabolites are predicted to play more pivotal roles in cellular metabolism than products of multimodular NRPSs. In contrast, multimodular subfamilies of NRPSs are of more recent origin, are restricted to fungi, show less stable domain architectures, and biosynthesize metabolites which perform more niche-specific functions than mono/bi-modular NRPS products. The euascomycete-only NRPS subfamily, in particular, shows evidence for extensive gain and loss of domains suggestive of the contribution of domain duplication and loss in responding to niche-specific pressures.