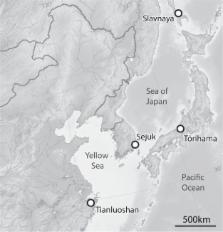 Organic residue analysis of ancient ceramic vessels enables the investigation of natural resources that were used in daily cooking practices in different part of the world. Despite many methodological advances, the utilization of plants in pottery has been difficult to demonstrate chemically, hindering the study of their role in ancient society, a topic that is especially important to understanding early agricultural practices at the start of the Neolithic period. Here, we present the first lipid residue study on the Chinese Neolithic pottery dated to 5.0 k - 4.7 k cal BC from the Tianluoshan site, Zhejiang province, a key site with early evidence for rice domestication. Through the identification of novel molecular biomarkers and extensive stable isotope analysis, we suggest that the pottery in Tianluoshan were largely used for processing starchy plant foods. These results not only highlight the significance of starchy plants in Neolithic southern China but also show a clear difference with other contemporary sites in northern Eurasia, where pottery is clearly orientated to aquatic resource exploitation. These differences may be linked with the early development of rice agriculture in China compared to its much later adoption in adjacent northerly regions.

Earliest date for milk use in the Near East and southeastern Europe linked to cattle herding.

Richard P. Evershed,  Sebastian Payne,  Andrew Sherratt … (2008)
The domestication of cattle, sheep and goats had already taken place in the Near East by the eighth millennium bc. Although there would have been considerable economic and nutritional gains from using these animals for their milk and other products from living animals-that is, traction and wool-the first clear evidence for these appears much later, from the late fifth and fourth millennia bc. Hence, the timing and region in which milking was first practised remain unknown. Organic residues preserved in archaeological pottery have provided direct evidence for the use of milk in the fourth millennium in Britain, and in the sixth millennium in eastern Europe, based on the delta(13)C values of the major fatty acids of milk fat. Here we apply this approach to more than 2,200 pottery vessels from sites in the Near East and southeastern Europe dating from the fifth to the seventh millennia bc. We show that milk was in use by the seventh millennium; this is the earliest direct evidence to date. Milking was particularly important in northwestern Anatolia, pointing to regional differences linked with conditions more favourable to cattle compared to other regions, where sheep and goats were relatively common and milk use less important. The latter is supported by correlations between the fat type and animal bone evidence.

Dolores R Piperno,  Ehud Weiss,  Irene Holst … (2004)
Barley (Hordeum vulgare L.) and wheat (Triticum monococcum L. and Triticum turgidum L.) were among the principal 'founder crops' of southwest Asian agriculture. Two issues that were central to the cultural transition from foraging to food production are poorly understood. They are the dates at which human groups began to routinely exploit wild varieties of wheat and barley, and when foragers first utilized technologies to pound and grind the hard, fibrous seeds of these and other plants to turn them into easily digestible foodstuffs. Here we report the earliest direct evidence for human processing of grass seeds, including barley and possibly wheat, in the form of starch grains recovered from a ground stone artefact from the Upper Palaeolithic site of Ohalo II in Israel. Associated evidence for an oven-like hearth was also found at this site, suggesting that dough made from grain flour was baked. Our data indicate that routine processing of a selected group of wild cereals, combined with effective methods of cooking ground seeds, were practiced at least 12,000 years before their domestication in southwest Asia.