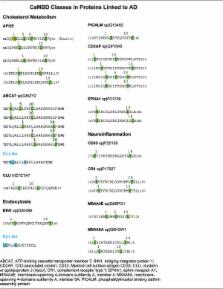 The small, calcium-sensor protein, calmodulin, is ubiquitously expressed and central to cell function in all cell types. Here the literature linking calmodulin to Alzheimer’s disease is reviewed. Several experimentally-verified calmodulin-binding proteins are involved in the formation of amyloid-β plaques including amyloid-β protein precursor, β-secretase, presenilin-1, and ADAM10. Many others possess potential calmodulin-binding domains that remain to be verified. Three calmodulin binding proteins are associated with the formation of neurofibrillary tangles: two kinases (CaMKII, CDK5) and one protein phosphatase (PP2B or calcineurin). Many of the genes recently identified by genome wide association studies and other studies encode proteins that contain putative calmodulin-binding domains but only a couple (e.g., APOE, BIN1) have been experimentally confirmed as calmodulin binding proteins. At least two receptors involved in calcium metabolism and linked to Alzheimer’s disease (mAchR; NMDAR) have also been identified as calmodulin-binding proteins. In addition to this, many proteins that are involved in other cellular events intimately associated with Alzheimer’s disease including calcium channel function, cholesterol metabolism, neuroinflammation, endocytosis, cell cycle events, and apoptosis have been tentatively or experimentally verified as calmodulin binding proteins. The use of calmodulin as a potential biomarker and as a therapeutic target is discussed.

H Akiyama,  S Barger,  S Barnum … (2015)
Inflammation clearly occurs in pathologically vulnerable regions of the Alzheimer's disease (AD) brain, and it does so with the full complexity of local peripheral inflammatory responses. In the periphery, degenerating tissue and the deposition of highly insoluble abnormal materials are classical stimulants of inflammation. Likewise, in the AD brain damaged neurons and neurites and highly insoluble amyloid beta peptide deposits and neurofibrillary tangles provide obvious stimuli for inflammation. Because these stimuli are discrete, microlocalized, and present from early preclinical to terminal stages of AD, local upregulation of complement, cytokines, acute phase reactants, and other inflammatory mediators is also discrete, microlocalized, and chronic. Cumulated over many years, direct and bystander damage from AD inflammatory mechanisms is likely to significantly exacerbate the very pathogenic processes that gave rise to it. Thus, animal models and clinical studies, although still in their infancy, strongly suggest that AD inflammation significantly contributes to AD pathogenesis. By better understanding AD inflammatory and immunoregulatory processes, it should be possible to develop anti-inflammatory approaches that may not cure AD but will likely help slow the progression or delay the onset of this devastating disorder.

P Dikkes,  L Zukerberg,  Jia-Huei Tsai … (1999)
Cyclin-dependent kinase 5 (Cdk5) is required for proper development of the mammalian central nervous system. To be activated, Cdk5 has to associate with its regulatory subunit, p35. We have found that p25, a truncated form of p35, accumulates in neurons in the brains of patients with Alzheimer's disease. This accumulation correlates with an increase in Cdk5 kinase activity. Unlike p35, p25 is not readily degraded, and binding of p25 to Cdk5 constitutively activates Cdk5, changes its cellular location and alters its substrate specificity. In vivo the p25/Cdk5 complex hyperphosphorylates tau, which reduces tau's ability to associate with microtubules. Moreover, expression of the p25/Cdk5 complex in cultured primary neurons induces cytoskeletal disruption, morphological degeneration and apoptosis. These findings indicate that cleavage of p35, followed by accumulation of p25, may be involved in the pathogenesis of cytoskeletal abnormalities and neuronal death in neurodegenerative diseases.

This article is published online with Open Access and distributed under the terms of the Creative Commons Attribution Non-Commercial License.