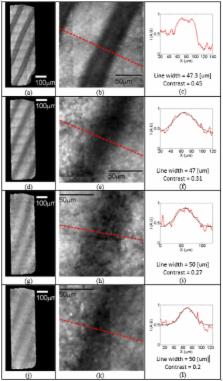 We describe an imaging approach based on an optical setup made up of a miniature, lensless, minimally invasive endoscope scanning a sample and matching post processing techniques that enable enhanced imaging capabilities. The two main scopes of this article are that this approach enables imaging beyond highly scattering medium and increases the resolution and signal to noise levels reaching single cell imaging. Our approach has more advantages over ordinary endoscope setups and other imaging techniques. It is not mechanically limited by a lens, the stable but flexible fiber can acquire images over long time periods (unlike current imaging methods such as OCT etc.), and the imaging can be obtained at a certain working distance above the surface, without interference to the imaged object. Fast overlapping scans enlarge the region of interest, enhance signal to noise levels and can also accommodate post-processing, super-resolution algorithms. Here we present that due to the setup properties, the overlapping scans also lead to dramatic enhancement of non-scattered signal to scattered noise. This enables imaging through highly scattering medium. We discuss results obtained from in vitro investigation of weak signals of ARPE cells, rat retina, and scattered signals from polydimethylsiloxane (PDMS) microchannels filled with hemoglobin and covered by intralipids consequently mimicking blood capillaries and the epidermis of human skin. The development of minimally invasive procedures and methodologies for imaging through scattering medium such as tissues can vastly enhance biomedical diagnostic capabilities for imaging internal organs. We thereby propose that our method may be used for such tasks in vivo.

R Munn,  James Miller,  R. D. Cardiff (2014)
The hematoxylin and eosin (H&E) stain is the standard used for microscopic examination of tissues that have been fixed, processed, embedded, and sectioned. It can be performed manually or by automation. For economic reasons, the manual technique is generally the method of choice for facilities with a low sample volume. This protocol describes manual H&E staining of fixed, processed, paraffin-embedded, and sectioned mouse tissues. In H&E-stained tissues, the nucleic acids stain dark blue and the proteins stain red to pink or orange. For accurate phenotyping and delineation of tissue detail, the protocol must be adhered to rigorously. This includes frequent reagent changes as well as the use of "in-date" reagents. Appropriate color in a good H&E stain allows for identification of many tissue subtleties that are necessary for accurate diagnosis. © 2014 Cold Spring Harbor Laboratory Press.