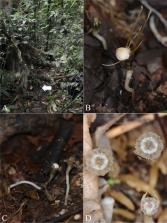 This report describes Thismia belumensis Siti-Munirah & Suhaimi-Miloko, a novel species of achlorophyllous herb discovered in the Royal Belum State Park, Peninsular Malaysia. This new species is unlike any previously described species of Thismia . In particular, T. belumensis possesses a unique annulus, which has been expanded and modified into a cucullate (hood-like) structure. This structure covers the apical floral tube and has an opening on one side facing a thickened part of the annulus, and the off-centre floral aperture confers a zygomorphic symmetry to the flower, indicating T. belumensis is more similar to Thismia labiata J.J.Sm. This morphological detail makes this new species distinct from all other described species of Thismia . In this report, we provide descriptions, illustrations, colour plates, and the provisional conservation status of Thismia belumensis .

PANKAJ KUMAR,  STEPHAN W. GALE,  JI-HONG LI … (2017)
Thismia nigricoronata is described as a new species in family Burmanniaceae. Both morphological and phylogenetic analyses indicate that this new Lao endemic is allied to T. taiwanensis in section Glaziocharis, and it can be differentiated on the basis of its longer vestigial stem leaves, reflexed free outer perianth lobes and ornamented, vibrantly coloured outer surface of the perianth tube. The infrageneric taxonomy of Thismia is reviewed, the genera Geomitra and Scaphiophora are officially reduced to sectional status in Thismia, and all species are enumerated in systematic order. A key to all currently accepted subgenera, sections and subsections is presented to facilitate further examination of their phylogenetic integrity in light of apparent conflict between the traditional morphology-based system and the emerging DNA-based classification.

Creation of Malaysia’s Royal Belum State Park: A Case Study of Conservation in a Developing Country.