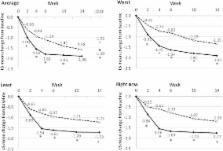 Fibromyalgia is characterized by widespread pain and is often accompanied by accessory symptoms. There are limited treatment options for this condition in Japan. Therefore, we conducted a phase III study to assess the efficacy and safety of duloxetine in Japanese patients with fibromyalgia.

This randomized, double-blind, placebo-controlled, parallel-group trial was conducted in Japan. Outpatients who met the American College of Rheumatology 1990 criteria for fibromyalgia and whose Brief Pain Inventory (BPI) average pain score was ≥4 were randomized to duloxetine 60 mg or placebo once daily for 14 weeks. The primary efficacy measure was the change in the BPI average pain score from baseline. Secondary efficacy, quality of life (QoL), and safety outcomes were also evaluated. Mixed-effects model repeated-measures (MMRM) analysis and last observation carried forward (LOCF) analysis of covariance were used to evaluate the primary efficacy measure.

Overall, 393 patients were randomized to receive either duloxetine (n = 196) or placebo (n = 197). The MMRM analysis revealed no significant difference between duloxetine and placebo regarding the change in BPI average pain scores at week 14. Based on LOCF analysis, a statistically significant improvement in the change in BPI average pain scores at week 14 was observed for patients treated with duloxetine compared with placebo. Duloxetine treatment was associated with improved outcomes in nearly all secondary and post hoc analyses. The treatment was generally well tolerated. Somnolence, nausea, and constipation were the most common treatment-emergent adverse events in the duloxetine group. The discontinuation rates due to treatment-emergent adverse events were similar in both groups.

Malcolm J. Bennett,  Neil R. Clark,  Anna K Bennett … (1991)
An instrument has been developed to assess the current health status of women with the fibromyalgia syndrome. The Fibromyalgia Impact Questionnaire (FIQ) is a brief 10-item, self-administered instrument that measures physical functioning, work status, depression, anxiety, sleep, pain, stiffness, fatigue, and well being. We describe its development and validation. This initial assessment indicates that the FIQ has sufficient evidence of reliability and validity to warrant further testing in both research and clinical situations.

Psychometric and clinical tests of validity of the Japanese SF-36 Health Survey.

S Fukuhara,  Russell Ware,  B Gandek … (1998)
Cross-sectional data from a representative sample of the general population in Japan were analyzed to test the validity of Japanese SF-36 Health Survey scales as measures of physical and mental health. Results from psychometric and clinical tests of validity were compared. Principal components analyses were used to test for the hypothesized physical and mental dimensions of health and the pattern of scale correlations with those components. To test the clinical validity of SF-36 scale scores, self-reports of chronic medical conditions and the Zung Self-Rating Depression Scale were used to create mutually exclusive groups differing in the severity of physical and mental conditions. The pattern of correlations between the SF-36 scales and the two empirically derived components generally confirmed hypotheses for most scales. Results of psychometric and clinical tests of validity were in agreement for the Physical Functioning, Role-Physical, Vitality, Social Functioning, and Mental Health scales. Relatively less agreement between psychometric and clinical tests of validity was observed for the Bodily Pain, General Health, and Role-Emotional scales, and the physical and mental health factor content of those scales was not consistent with hypotheses. In clinical tests of validity, the General Health, Bodily Pain, and Physical Functioning scales were the most valid scales in discriminating between groups with and without a severe physical condition. Scales that correlated highest with mental health in the components analysis (Mental Health and Vitality) also were most valid in discriminating between groups with and without depression. The results of this study provide preliminary interpretation guidelines for all SF-36 scales, although caution is recommended in the interpretation of the Role-Emotional, Bodily Pain, and General Health scales pending further studies in Japan.