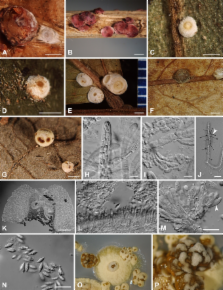 The present taxonomic revision deals with Neotropical species of three entomopathogenic genera that were once included in Hypocrella s. l.: Hypocrella s. str. (anamorph Aschersonia), Moelleriella (anamorph aschersonia-like), and Samuelsia gen. nov (anamorph aschersonia-like). Species of Hypocrella, Moelleriella, and Samuelsia are pathogens of scale insects (Coccidae and Lecaniidae, Homoptera) and whiteflies (Aleyrodidae, Homoptera) and are common in tropical regions. Phylogenetic analyses of DNA sequences from nuclear ribosomal large subunit (28S), translation elongation factor 1-α (TEF 1-α), and RNA polymerase II subunit 1 (RPB1) and analyses of multiple morphological characters demonstrate that the three segregated genera can be distinguished by the disarticulation of the ascospores and shape and size of conidia. Moelleriella has filiform multi-septate ascospores that disarticulate at the septa within the ascus and aschersonia-like anamorphs with fusoid conidia. Hypocrella s. str. has filiform to long-fusiform ascospores that do not disarticulate and Aschersonia s. str. anamorphs with fusoid conidia. The new genus proposed here, Samuelsia, has filiform to long-fusiform ascospores that do not disarticulate and aschersonia-like anamorphs with small allantoid conidia. In addition, the present study presents and discusses the evolution of species, morphology, and ecology in Hypocrella, Moelleriella, and Samuelsia based on multigene phylogenetic analyses.

John Taylor,  David J Jacobson,  Scott Kroken … (2000)
The operational species concept, i.e., the one used to recognize species, is contrasted to the theoretical species concept. A phylogenetic approach to recognize fungal species based on concordance of multiple gene genealogies is compared to those based on morphology and reproductive behavior. Examples where Phylogenetic Species Recognition has been applied to fungi are reviewed and concerns regarding Phylogenetic Species Recognition are discussed.

Claude Roux,  François Lutzoni,  Valérie Reeb (2004)
Despite the recent progress in molecular phylogenetics, many of the deepest relationships among the main lineages of the largest fungal phylum, Ascomycota, remain unresolved. To increase both resolution and support on a large-scale phylogeny of lichenized and non-lichenized ascomycetes, we combined the protein coding-gene RPB2 with the traditionally used nuclear ribosomal genes SSU and LSU. Our analyses resulted in the naming of the new subclasses Acarosporomycetidae and Ostropomycetidae, and the new class Lichinomycetes, as well as the establishment of the phylogenetic placement and novel circumscription of the lichen-forming fungi family Acarosporaceae. The delimitation of this family has been problematic over the past century, because its main diagnostic feature, true polyspory (numerous spores issued from multiple post-meiosis mitoses) with over 100 spores per ascus, is probably not restricted to the Acarosporaceae. This observation was confirmed by our reconstruction of the origin and evolution of this form of true polyspory using maximum likelihood as the optimality criterion. The various phylogenetic analyses carried out on our data sets allowed us to conclude that: (1) the inclusion of phylogenetic signal from ambiguously aligned regions into the maximum parsimony analyses proved advantageous in reconstructing phylogeny; however, when more data become available, Bayesian analysis using different models of evolution is likely to be more efficient; (2) neighbor-joining bootstrap proportions seem to be more appropriate in detecting topological conflict between data partitions of large-scale phylogenies than posterior probabilities; and (3) Bayesian bootstrap proportion provides a compromise between posterior probability outcomes (i.e., higher accuracy, but with a higher number of significantly supported wrong internodes) vs. maximum likelihood bootstrap proportion outcomes (i.e., lower accuracy, with a lower number of significantly supported wrong internodes).

You are free to share - to copy, distribute and transmit the work, under the following conditions:

Attribution:  You must attribute the work in the manner specified by the author or licensor (but not in any way that suggests that they endorse you or your use of the work).

Non-commercial:  You may not use this work for commercial purposes.

No derivative works:  You may not alter, transform, or build upon this work.

For any reuse or distribution, you must make clear to others the license terms of this work, which can be found at http://creativecommons.org/licenses/by-nc-nd/3.0/legalcode. Any of the above conditions can be waived if you get permission from the copyright holder. Nothing in this license impairs or restricts the author's moral rights.