Anger, Emotion, and Arrhythmias: from Brain to Heart 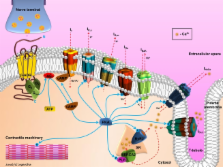 Strong emotion and mental stress are now recognized as playing a significant role in severe and fatal ventricular arrhythmias. The mechanisms, although incompletely understood, include central processing at the cortical and brain stem level, the autonomic nerves and the electrophysiology of the myocardium. Each of these is usually studied separately by investigators from different disciplines. However, many are regulatory processes which incorporate interactive feedforward and feedback mechanisms. In this review we consider the whole as an integrated interactive brain–heart system.

J Bigger,  Renato A. Mortara,  Philip Marcus … (1998)
Experimental evidence suggests that autonomic markers such as heart-rate variability and baroreflex sensitivity (BRS) may contribute to postinfarction risk stratification. There are clinical data to support this concept for heart-rate variability. The main objective of the ATRAMI study was to provide prospective data on the additional and independent prognostic value for cardiac mortality of heart-rate variability and BRS in patients after myocardial infarction in whom left-ventricular ejection fraction (LVEF) and ventricular arrhythmias were known. This multicentre international prospective study enrolled 1284 patients with a recent ( 105 ms, BRS >6.1 ms per mm Hg). The association of low SDNN or BRS with LVEF below 35% carried a relative risk of 6.7 (3.1-14.6) or 8.7 (4.3-17.6), respectively, compared with patients with LVEF above 35% and less compromised SDNN (> or = 70 ms) and BRS (> or = 3 ms per mm Hg). ATRAMI provides clinical evidence that after myocardial infarction the analysis of vagal reflexes has significant prognostic value independently of LVEF and of ventricular arrhythmias and that it significantly adds to the prognostic value of heart-rate variability.

I Denjoy,  Alexander Towbin,  W Haverkamp … (2001)
The congenital long-QT syndrome (LQTS) is caused by mutations on several genes, all of which encode cardiac ion channels. The progressive understanding of the electrophysiological consequences of these mutations opens unforeseen possibilities for genotype-phenotype correlation studies. Preliminary observations suggested that the conditions ("triggers") associated with cardiac events may in large part be gene specific. We identified 670 LQTS patients of known genotype (LQT1, n=371; LQT2, n=234; LQT3, n=65) who had symptoms (syncope, cardiac arrest, sudden death) and examined whether 3 specific triggers (exercise, emotion, and sleep/rest without arousal) differed according to genotype. LQT1 patients experienced the majority of their events (62%) during exercise, and only 3% occurred during rest/sleep. These percentages were almost reversed among LQT2 and LQT3 patients, who were less likely to have events during exercise (13%) and more likely to have events during rest/sleep (29% and 39%). Lethal and nonlethal events followed the same pattern. Corrected QT interval did not differ among LQT1, LQT2, and LQT3 patients (498, 497, and 506 ms, respectively). The percent of patients who were free of recurrence with ss-blocker therapy was higher and the death rate was lower among LQT1 patients (81% and 4%, respectively) than among LQT2 (59% and 4%, respectively) and LQT3 (50% and 17%, respectively) patients. Life-threatening arrhythmias in LQTS patients tend to occur under specific circumstances in a gene-specific manner. These data allow new insights into the mechanisms that relate the electrophysiological consequences of mutations on specific genes to clinical manifestations and offer the possibility of complementing traditional therapy with gene-specific approaches.

The James-Lange Theory of Emotions: A Critical Examination and an Alternative Theory

This article was submitted to Frontiers in Cardiac Electrophysiology, a specialty of Frontiers in Physiology.