The Manchester Respiratory-related Sleep Symptoms scale for patients with COPD: development and validation 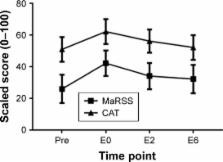 Focus groups including COPD and age-matched controls were used to develop an item-list, which was then administered to COPD patients and age-matched controls in a cross-sectional study. Hierarchical and Rasch analysis informed item selection and scale unidimensionality. Construct validity was examined using Pearson’s correlation with the Sleep Problems Index, St George’s Respiratory Questionnaire (SGRQ), and FACIT-Fatigue scale. MaRSS change scores from baseline (stable) to exacerbation were assessed in a separate sub-study of COPD patients.

The MaRSS is a reliable, valid, and clinically responsive measure of respiratory-related symptoms that disturb sleep. It is simple to use and score, making it suitable for research and clinical practice.

L A Sesti,  Ron D Hays,  Corinne S. Martin … (2004)
Sleep is an active and highly organized biological process that is an important component of life. Self-report measures of sleep provide information that can be useful for characterizing the quality of sleep in subgroups of the population. A 12-item self-report sleep measure, the Medical Outcomes Study Sleep measure, was developed and evaluated previously in a sample of 3445 individuals with chronic illness. In this study, we evaluate the psychometric properties of the MOS Sleep measure in a nationally representative sample of 1011 US adults aged 18 and older and in a sample of 173 adults with neuropathic pain participating in a clinical drug trial. The average age of the general population sample was 46; 51% were female and 81% were white. The average age of the sample of adults with neuropathic pain was 72; 53% were female and 95% were white. Internal consistency reliability estimates for the MOS Sleep scales were 0.73 or higher, with the exception of the daytime somnolence scale in the US general population, which was 0.63. At baseline of the clinical trial, the neuropathic pain patients reported significantly more sleep disturbance and daytime somnolence, as well as less quantity and adequacy of sleep than patients in the general US population. The MOS Sleep scales were found to be responsive to change in the clinical trial with statistically significant improvements observed after administration of pregabalin for sleep disturbance (standardized response mean, SRM=-0.76, P=0.0007), shortness of breath (SRM=-0.20, P=0.0302), sleep adequacy (SRM=0.57, P=0.0014), sleep quantity (SRM=0.55, P=0.0086), and sleep problems (SRM=-0.62, P=0.0036). This study provides further support for the reliability and validity of the MOS Sleep measure. The instrument can be used to assess important aspects of sleep perceived by adults in the general population or participating in clinical studies.

Alan Tennant,  Stephen McKenna,  Peter Hagell (2015)
This paper discusses recent advances that have been made in the field of psychometrics, specifically, the application of Rasch analysis to the instrument development process. It emphasizes the importance of assessing the fundamental scaling properties of an instrument prior to consideration of traditional psychometric indicators. The paper introduces Rasch analysis and shows how it has been applied in the development of needs-based measures in order to ensure that they provide unidimensional measurement. By ensuring that scales are based on the same measurement model and that they fit the Rasch model it is possible for QoL scores to be compared across diseases by means of cocalibration and item banking.