Is the 6-minute pegboard and ring test valid to evaluate upper limb function in hospitalized patients with acute exacerbation of COPD? 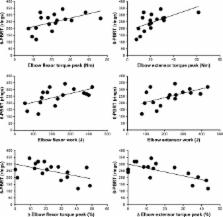 The 6-minute pegboard and ring test (6-PBRT) is a useful test for assessing the functional capacity of upper limbs in patients with stable COPD. Although 6-PBRT has been validated in stable patients, the possibility of a high floor effect could compromise the validity of the test in the hospital setting. The aim of this study was to verify the convergent validity of 6-PBRT in hospitalized patients with acute exacerbation of COPD (AECOPD).

A cross-sectional study was conducted in a tertiary hospital. Patients who were hospitalized due to AECOPD and healthy elderly participants, voluntarily recruited from the community, were considered for inclusion. All participants underwent a 6-PBRT. Isokinetic evaluation to measure the strength and endurance of elbow flexors and extensors, handgrip strength (HGS), spirometry testing, the modified Pulmonary Functional Status Dyspnea Questionnaire (PFSDQ-M), the COPD assessment test (CAT), and symptoms of dyspnea and fatigue were all measured as comparisons for convergent validity. Good convergent validity was considered if >75% of these hypotheses could be confirmed (correlation coefficient>0.50).

The 6-PBRT is valid for the evaluation of functional capacity of upper limbs in hospitalized patients with AECOPD.

Validation of the Modified Pulmonary Functional Status and Dyspnea Questionnaire and the Medical Research Council scale for use in Brazilian patients with chronic obstructive pulmonary disease.

Vanessa S. Probst,  Demétria Kovelis,  Fabio Pitta … (2008)
To determine the validity and reproducibility of two subjective instruments to assess limitations in activities of daily living (ADLs) in patients with chronic obstructive pulmonary disease (COPD) in Brazil: the Pulmonary Functional Status and Dyspnea Questionnaire - Modified version (PFSDQ-M) and the Medical Research Council (MRC) scale. Thirty patients with COPD (age, 67 +/- 10 years; males, 17; forced expiratory volume in one second, 42% +/- 13% of predicted) completed the Portuguese-language versions of the two instruments on two occasions, one week apart. The PFSDQ-M has three components: influence of dyspnea on ADLs, influence of fatigue on ADLs change in ADLs experienced by the patient. The MRC scale is simple, with only five items, in which patients report the degree to which dyspnea limits their performance of ADLs. The traditional Saint George's Respiratory Questionnaire (SGRQ), previously validated for use in Brazil, was used as a validation criterion. The test-retest reliability (intraclass correlation coefficient) of the PFSDQ-M was 0.93, 0.92 and 0.90 for dyspnea, fatigue and change components, respectively, compared with 0.83 for the MRC scale. Bland-Altman plots showed good test-retest agreement for the PFSDQ-M. The components of the PFSDQ-M and the MRC scale correlated significantly with all of the domains and the total score of the SGRQ (0.49 < r < 0.80; p < 0.01 for all). The Portuguese-language versions of the PFSDQ-M and the MRC scale proved reproducible and valid for use in patients with COPD in Brazil.

Dyssynchronous breathing during arm but not leg exercise in patients with chronic airflow obstruction.

J Rassulo,  B Celli,  B Make (1986)
Some patients with chronic airflow obstruction experience dyspnea with mild arm exercise but not with more-intense leg exercise. To investigate why these patients have limited endurance during arm exertion, we studied ventilatory responses to exercise with unsupported arms in 12 patients with chronic airflow obstruction (mean [+/- SD] forced expiratory volume in one second, 0.68 +/- 0.28 liters). Unloaded leg cycling was also studied for comparison. In the five patients who had the most severe airflow obstruction, arm exercise was limited by dyspnea after 3.3 +/- 0.7 minutes, and dyssynchronous thoracoabdominal breathing developed. In the other seven patients, arm exercise was limited by the sensation of muscle fatigue after 6.1 +/- 2.0 minutes (P less than 0.05), and dyssynchronous breathing did not occur. None of the 12 patients had dyssynchronous breathing during unloaded leg cycling. Maximal transdiaphragmatic pressure, a measure of diaphragmatic fatigue, declined similarly after arm and leg exercise in both groups. During unsupported arm work, the accessory muscles of inspiration help position the torso and arms. We hypothesize that the extra demand placed on these muscles during arm exertion leads to early fatigue, an increased load on the diaphragm, and dyssynchronous thoracoabdominal inspirations. This sequence may contribute to dyspnea and limited endurance during upper-extremity exercise.