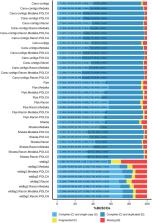 Anthony M. Bolger,  Marc Lohse,  Bjoern Usadel (2014)
Motivation: Although many next-generation sequencing (NGS) read preprocessing tools already existed, we could not find any tool or combination of tools that met our requirements in terms of flexibility, correct handling of paired-end data and high performance. We have developed Trimmomatic as a more flexible and efficient preprocessing tool, which could correctly handle paired-end data. Results: The value of NGS read preprocessing is demonstrated for both reference-based and reference-free tasks. Trimmomatic is shown to produce output that is at least competitive with, and in many cases superior to, that produced by other tools, in all scenarios tested. Availability and implementation: Trimmomatic is licensed under GPL V3. It is cross-platform (Java 1.5+ required) and available at http://www.usadellab.org/cms/index.php?page=trimmomatic Contact: usadel@bio1.rwth-aachen.de Supplementary information: Supplementary data are available at Bioinformatics online.

Alexey Gurevich,  Vladislav Saveliev,  Nikolay Vyahhi … (2013)
Limitations of genome sequencing techniques have led to dozens of assembly algorithms, none of which is perfect. A number of methods for comparing assemblers have been developed, but none is yet a recognized benchmark. Further, most existing methods for comparing assemblies are only applicable to new assemblies of finished genomes; the problem of evaluating assemblies of previously unsequenced species has not been adequately considered. Here, we present QUAST-a quality assessment tool for evaluating and comparing genome assemblies. This tool improves on leading assembly comparison software with new ideas and quality metrics. QUAST can evaluate assemblies both with a reference genome, as well as without a reference. QUAST produces many reports, summary tables and plots to help scientists in their research and in their publications. In this study, we used QUAST to compare several genome assemblers on three datasets. QUAST tables and plots for all of them are available in the Supplementary Material, and interactive versions of these reports are on the QUAST website. http://bioinf.spbau.ru/quast . Supplementary data are available at Bioinformatics online.

This article was submitted to Plant Genomics, a section of the journal Frontiers in Genetics