RNA Interference in the Age of CRISPR: Will CRISPR Interfere with RNAi? 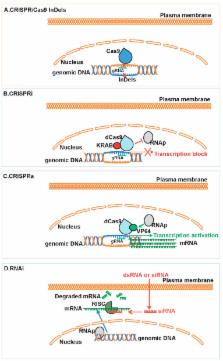 The recent emergence of multiple technologies for modifying gene structure has revolutionized mammalian biomedical research and enhanced the promises of gene therapy. Over the past decade, RNA interference (RNAi) based technologies widely dominated various research applications involving experimental modulation of gene expression at the post-transcriptional level. Recently, a new gene editing technology, Clustered Regularly Interspaced Short Palindromic Repeats (CRISPR) and the CRISPR-associated protein 9 (Cas9) (CRISPR/Cas9) system, has received unprecedented acceptance in the scientific community for a variety of genetic applications. Unlike RNAi, the CRISPR/Cas9 system is bestowed with the ability to introduce heritable precision insertions and deletions in the eukaryotic genome. The combination of popularity and superior capabilities of CRISPR/Cas9 system raises the possibility that this technology may occupy the roles currently served by RNAi and may even make RNAi obsolete. We performed a comparative analysis of the technical aspects and applications of the CRISPR/Cas9 system and RNAi in mammalian systems, with the purpose of charting out a predictive picture on whether the CRISPR/Cas9 system will eclipse the existence and future of RNAi. The conclusion drawn from this analysis is that RNAi will still occupy specific domains of biomedical research and clinical applications, under the current state of development of these technologies. However, further improvements in CRISPR/Cas9 based technology may ultimately enable it to dominate RNAi in the long term.

Erik Sontheimer,  Luciano A. Marraffini,  James Mussell (2009)
Horizontal gene transfer (HGT) in bacteria and archaea occurs through phage transduction, transformation, or conjugation, and the latter is particularly important for the spread of antibiotic resistance. Clustered, regularly interspaced, short palindromic repeat (CRISPR) loci confer sequence-directed immunity against phages. A clinical isolate of Staphylococcus epidermidis harbors a CRISPR spacer that matches the nickase gene present in nearly all staphylococcal conjugative plasmids. Here we show that CRISPR interference prevents conjugation and plasmid transformation in S. epidermidis. Insertion of a self-splicing intron into nickase blocks interference despite the reconstitution of the target sequence in the spliced mRNA, which indicates that the interference machinery targets DNA directly. We conclude that CRISPR loci counteract multiple routes of HGT and can limit the spread of antibiotic resistance in pathogenic bacteria.

Ruth Elena Soria-Guerra,  Jesús García-Rentería,  César Díez-Villaseñor … (2005)
Prokaryotes contain short DN repeats known as CRISPR, recognizable by the regular spacing existing between the recurring units. They represent the most widely distributed family of repeats among prokaryotic genomes suggesting a biological function. The origin of the intervening sequences, at present unknown, could provide clues about their biological activities. Here we show that CRISPR spacers derive from preexisting sequences, either chromosomal or within transmissible genetic elements such as bacteriophages and conjugative plasmids. Remarkably, these extrachromosomal elements fail to infect the specific spacer-carrier strain, implying a relationship between CRISPR and immunity against targeted DNA. Bacteriophages and conjugative plasmids are involved in prokaryotic population control, evolution, and pathogenicity. All these biological traits could be influenced by the presence of specific spacers. CRISPR loci can be visualized as mosaics of a repeated unit, separated by sequences at some time present elsewhere in the cell.

Ibtissem Grissa,  Gilles Vergnaud,  Christine Pourcel (2007)
Background In Archeae and Bacteria, the repeated elements called CRISPRs for "clustered regularly interspaced short palindromic repeats" are believed to participate in the defence against viruses. Short sequences called spacers are stored in-between repeated elements. In the current model, motifs comprising spacers and repeats may target an invading DNA and lead to its degradation through a proposed mechanism similar to RNA interference. Analysis of intra-species polymorphism shows that new motifs (one spacer and one repeated element) are added in a polarised fashion. Although their principal characteristics have been described, a lot remains to be discovered on the way CRISPRs are created and evolve. As new genome sequences become available it appears necessary to develop automated scanning tools to make available CRISPRs related information and to facilitate additional investigations. Description We have produced a program, CRISPRFinder, which identifies CRISPRs and extracts the repeated and unique sequences. Using this software, a database is constructed which is automatically updated monthly from newly released genome sequences. Additional tools were created to allow the alignment of flanking sequences in search for similarities between different loci and to build dictionaries of unique sequences. To date, almost six hundred CRISPRs have been identified in 475 published genomes. Two Archeae out of thirty-seven and about half of Bacteria do not possess a CRISPR. Fine analysis of repeated sequences strongly supports the current view that new motifs are added at one end of the CRISPR adjacent to the putative promoter. Conclusion It is hoped that availability of a public database, regularly updated and which can be queried on the web will help in further dissecting and understanding CRISPR structure and flanking sequences evolution. Subsequent analyses of the intra-species CRISPR polymorphism will be facilitated by CRISPRFinder and the dictionary creator. CRISPRdb is accessible at