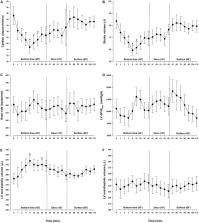 Cardiovascular risk is elevated in divers, but detailed information of cardiac function during diving is missing. The aim of this study was to apply an intact rat model with continuous monitoring of cardiac left ventricular (LV) function in a simulated diving experiment. Thirteen rats were inserted with a LV pressure–volume catheter and a pressure transducer in the femoral artery to measure hemodynamic variables, and randomly assigned to diving ( n = 9) and control ( n = 4) groups. The diving group was compressed to 600 kPa in air, maintained at pressure for 45 min (bottom phase), and decompressed to surface at 50 kPa/min. Data was collected before, during, and up to 60 min after exposure in the diving group, and at similar times in non-diving controls. During the bottom phase, stroke volume (SV) (−29%) and cardiac output (−30%) decreased, whereas LV end-systolic volume (+13%), mean arterial pressure (MAP) (+29%), and total peripheral resistance (TPR) (+72%) increased. There were no changes in LV contractility, stroke work, or diastolic function. All hemodynamic variables returned to baseline values within 60 min after diving. In conclusion, our simulated dive experiment to 600 kPa increased MAP and TPR to levels which caused a substantial reduction in SV and LV volume output. The increase in cardiac afterload demonstrated to take place during a dive is well tolerated by the healthy heart in our model, whereas in a failing heart this abrupt change in afterload may lead to acute cardiac decompensation.

Heat flow and distribution during induction of general anesthesia.

Effect of hyperoxia on left ventricular function and filling pressures in patients with and without congestive heart failure.

Susanna Mak,  Eduardo R. de Azevedo,  Peter P Liu … (2001)
To determine the effects of hyperoxia on left ventricular (LV) function in humans with and without congestive heart failure (CHF). An acute physiologic study of the effect of hyperoxia on right-heart hemodynamics, LV contractility (peak positive rate of rise of LV pressure [+dP/dt]), time constant of isovolumic left ventricular relaxation (tau), and LV filling pressures. Bayer Cardiovascular Clinical Research Laboratory at the Mount Sinai Hospital, Toronto, Ontario. Sixteen patients with stable CHF and 12 subjects with normal LV function received the hyperoxia intervention. Patients received 21% O(2) by a nonrebreather mask, followed by 100% O(2) for 20 min, and 21% O(2) for a 10-min recovery period. In response to hyperoxia, there was a 22 +/- 6% increase in LV end-diastolic pressure (LVEDP) in the CHF group and a similar 29 +/- 14% increase in LVEDP in the normal LV function group (p < 0.05 for both; mean +/- SEM). Hyperoxia was also associated with a prolongation in tau of 10 +/- 2% in the CHF group (p < 0.05) and 8 +/- 2% in the normal LV function group (p < 0.05). No changes in +dP/dt were observed in either group. Hyperoxia was associated with impairment of cardiac relaxation and increased LV filling pressures in patients with and without CHF. These observations indicate that caution should be used in the administration of high inspired O(2) fractions to normoxic patients, especially in the setting of CHF.

Virginia H. Huxley (2007)
The ability to recognize and appreciate from a reproductive standpoint that males and females possess different attributes has been long standing. Only more recently have we begun to look more deeply into both the similarities and differences between men and women, as well as between boys and girls, with respect to the structure and function of other organ systems. This article focuses on the cardiovascular system, with examples of sex differences in the control of coronary function, blood pressure, and volume. Recognizing the differences between the sexes with respect to cardiovascular function facilitates understanding of the mechanisms whereby homeostasis can be achieved using different contributions or components of the living system. Furthermore, recognition of the differences as well as the similarities permits the design of appropriate diagnostic instruments, recognition of sex-specific pathophysiology, and implementation of appropriate treatment of cardiovascular disease in men and women.

This article was submitted to Environmental, Aviation and Space Physiology, a section of the journal Frontiers in Physiology