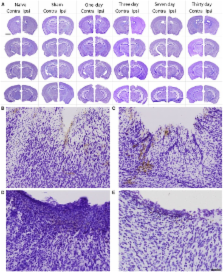 Microglia and neuroinflammation: a pathological perspective

Wolfgang J Streit,  Robert Mrak,  W Sue T Griffin (2004)
Microglia make up the innate immune system of the central nervous system and are key cellular mediators of neuroinflammatory processes. Their role in central nervous system diseases, including infections, is discussed in terms of a participation in both acute and chronic neuroinflammatory responses. Specific reference is made also to their involvement in Alzheimer's disease where microglial cell activation is thought to be critically important in the neurodegenerative process.

Devi E. Nampiaparampil (2008)
The Centers for Disease Control and Prevention estimates that approximately 1.4 million US individuals sustain traumatic brain injuries (TBIs) per year. Previous reports suggest an association between TBI and chronic pain syndromes (eg, headache) thought to be more common in patients with mild TBI and in those who have sustained brain injury from violent rather than unintentional trauma. Comorbid psychiatric disorders such as posttraumatic stress disorder (PTSD) may also mediate chronic pain symptoms. To determine the prevalence of chronic pain as an underdiagnosed consequence of TBI and to review the interaction between chronic pain and severity of TBI as well as the characteristics of pain after TBI among civilians and combatants. The Ovid/MEDLINE database was searched for articles published between 1951 and February 2008 using any combination of the terms brain injury, pain, headache, blast injury, and combat (combat disorders, war, military medicine, wounds and injuries, military personnel, veterans). The PubMed and MD Consult databases were searched in a similar fashion. The Cochrane Collaboration, National Institutes of Health Clinical Trials Database, Meta-Register of Current Controlled Trials, and CRISP databases were searched using the keyword brain injury. All articles in peer-reviewed journals reporting original data on pain syndromes in adult patients with TBI with regard to pain prevalence, pain category, risk factors, pathogenesis, and clinical course were selected, and manual searches were performed of their reference lists. The data were pooled and prevalence rates calculated. Twenty-three studies (15 cross-sectional, 5 prospective, and 3 retrospective) including 4206 patients were identified. Twelve studies assessed headache pain in 1670 patients. Of these, 966 complained of chronic headache, yielding a prevalence of 57.8% (95% confidence interval [CI], 55.5%-60.2%). Among civilians, the prevalence of chronic pain was greater in patients with mild TBI (75.3% [95% CI, 72.7%-77.9%]) compared with moderate or severe TBI (32.1% [95% CI, 29.3%-34.9%]). Twenty studies including 3289 civilian patients with TBI yielded a chronic pain prevalence of 51.5% (95% CI, 49.8%-53.2%). Three studies assessed TBI among 917 veterans and yielded a pain prevalence of 43.1% (95% CI, 39.9%-46.3%). PTSD may mediate chronic pain, but brain injury appears to have an independent correlation with chronic pain. Chronic pain is a common complication of TBI. It is independent of psychologic disorders such as PTSD and depression and is common even among patients with apparently minor injuries to the brain.

Michael Galic,  Kiarash Riazi,  Quentin J Pittman (2012)
Cytokines are molecules secreted by peripheral immune cells, microglia, astrocytes and neurons in the central nervous system. Peripheral or central inflammation is characterized by an upregulation of cytokines and their receptors in the brain. Emerging evidence indicates that pro-inflammatory cytokines modulate brain excitability. Findings from both the clinical literature and from in vivo and in vitro laboratory studies suggest that cytokines can increase seizure susceptibility and may be involved in epileptogenesis. Cellular mechanisms that underlie these effects include upregulation of excitatory glutamatergic transmission and downregulation of inhibitory GABAergic transmission. Copyright © 2012 Elsevier Inc. All rights reserved.