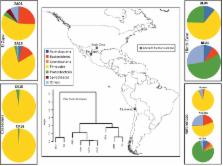 In an effort to better understand the ancestral state of the human distal gut microbiome, we examine feces retrieved from archaeological contexts (coprolites). To accomplish this, we pyrosequenced the 16S rDNA V3 region from duplicate coprolite samples recovered from three archaeological sites, each representing a different depositional environment: Hinds Cave (∼8000 years B.P.) in the southern United States, Caserones (1600 years B.P.) in northern Chile, and Rio Zape in northern Mexico (1400 years B.P.). Clustering algorithms grouped samples from the same site. Phyletic representation was more similar within sites than between them. A Bayesian approach to source-tracking was used to compare the coprolite data to published data from known sources that include, soil, compost, human gut from rural African children, human gut, oral and skin from US cosmopolitan adults and non-human primate gut. The data from the Hinds Cave samples largely represented unknown sources. The Caserones samples, retrieved directly from natural mummies, matched compost in high proportion. A substantial and robust proportion of Rio Zape data was predicted to match the gut microbiome found in traditional rural communities, with more minor matches to other sources. One of the Rio Zape samples had taxonomic representation consistent with a child. To provide an idealized scenario for sample preservation, we also applied source tracking to previously published data for Ötzi the Iceman and a soldier frozen for 93 years on a glacier. Overall these studies reveal that human microbiome data has been preserved in some coprolites, and these preserved human microbiomes match more closely to those from the rural communities than to those from cosmopolitan communities. These results suggest that the modern cosmopolitan lifestyle resulted in a dramatic change to the human gut microbiome.

Anders F. Andersson,  Mathilda Lindberg,  Hedvig Jakobsson … (2008)
Humans host complex microbial communities believed to contribute to health maintenance and, when in imbalance, to the development of diseases. Determining the microbial composition in patients and healthy controls may thus provide novel therapeutic targets. For this purpose, high-throughput, cost-effective methods for microbiota characterization are needed. We have employed 454-pyrosequencing of a hyper-variable region of the 16S rRNA gene in combination with sample-specific barcode sequences which enables parallel in-depth analysis of hundreds of samples with limited sample processing. In silico modeling demonstrated that the method correctly describes microbial communities down to phylotypes below the genus level. Here we applied the technique to analyze microbial communities in throat, stomach and fecal samples. Our results demonstrate the applicability of barcoded pyrosequencing as a high-throughput method for comparative microbial ecology.

Support for this research is from the National Institutes of Health (grants R01 HG005172-01 and R01 GM089886-01A1) and the National Science Foundation (NSF#0845314). The funders had no role in study design, data collection and analysis, decision to publish, or preparation of the manuscript.