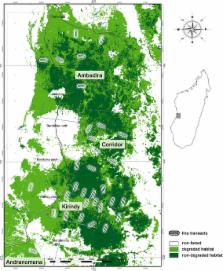 Interspecific competition between the mouse lemurs was indicated by negative spatial associations in degraded habitat and by habitat partitioning along anthropogenic disturbance gradients during dry seasons with resource scarcity. In non-degraded habitat, intraguild predator M. coquereli, but not C. medius, was negatively associated with M. murinus on the population level, whereas its regional distribution overlapped spatially with that of M. berthae. The species’ interspecific distribution pattern across spatial and temporal heterogeneities corresponded to predictions for agent-mediated coexistence and thus confirmed M. coquereli’s stabilizing impact on the coexistence of mouse lemurs.

Interspecific interactions contribute to ecological structure in this cheirogaleid assemblage and determinants vary across spatio-temporal heterogeneities. Coexistence of Microcebus spp. is stabilized by an agent-mediated spatial storage effect: M. coquereli creates refuges from competition for M. berthae in intact habitat, whereas anthropogenic environments provide M. murinus with an escape from resource competition and intraguild predation. Species persistence in the assemblage therefore depends on the conservation of habitat content and context that stabilizing mechanisms rely on. Our large-scale population level approach did not allow for considering all potential functional and stochastic drivers of ecological structure, a key limitation that accounts for the large proportion of unexplained variance in our models.

On the Relationship between Abundance and Distribution of Species

Renato Valencia,  Nathan J. B. Kraft,  David Ackerly (2008)
It is debated whether species-level differences in ecological strategy, which play a key role in much of coexistence theory, are important in structuring highly diverse communities. We examined the co-occurrence patterns of over 1100 tree species in a 25-hectare Amazonian forest plot in relation to field-measured functional traits. Using a null model approach, we show that co-occurring trees are often less ecologically similar than a niche-free (neutral) model predicts. Furthermore, we find evidence for processes that simultaneously drive convergence and divergence in key aspects of plant strategy, suggesting that at least two distinct niche-based processes are occurring. Our results show that strategy differentiation among species contributes to the maintenance of diversity in one of the most diverse tropical forests in the world.

R. T. Paine (1974)
Along exposed rocky intertidal shorelines of western North America the mussel Mytilus californianus exists as a characteristic, well-defined band. Measurements at Mukkaw Bay and Tatoosh Island, Washington State, suggest that the upper limit to distribution is constant. The lower limit is also predictably constant, as judged by photographs of the same areas taken up to 9 years apart. The band of mussels is formed by larval recruitment to a variety of substrates, especially the filamentous red alga Endocladia muricata. From the settlement site, if the mussels survive a series of predators including the starfish Pisaster ochraceus and a variety of carnivorous gastropods (Thais spp.), the mussles may be washed inward or migrate (be pushed) downward.When Pisaster was removed manually, the zonation pattern changed rapidly. Mussels advanced downward at Mukkaw Bay a vertical distance of 0.85 m in 5 years. No movement was observed on 2 adjacent control sites. At Tatoosh Island a maximum displacement of 1.93 m has been observed in 3 years; the slope there is 40°. Again, there was no change at control sites with Pisaster. At Mukkaw Bay over 25 species of invertebrates and benthic algae are excluded from occupancy of the primary substratum by mussels. The ecological dominance of mussels is discussed; predation is shown to enhance coexistence among potential competitors. A survival curve for Pollicipes polymerus indicates that the time course for interspecific competitive exclusion may be long (76 months). The clarity of the biological interrelationships and the constancy of pattern through time provide no support for the contention that intertidal communities are physically-controlled.