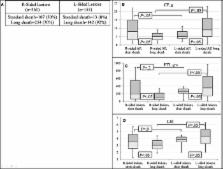 Based on data from studies of atrial fibrillation ablations, optimal parameters for the TactiCath (TC; St. Jude Medical, Inc) force‐sensing ablation catheter are a contact force of 20 g and a force‐time integral of 400 g·s for the creation of transmural lesions. We aimed to evaluate TC in pediatric and congenital heart disease patients undergoing ablation.

Comprehensive chart and case reviews were performed from June 2015 to March 2016. Of the 102 patients undergoing electrophysiology study plus ablation, 58 (57%) underwent ablation initially with a force‐sensing catheter. Patients had an average age of 14 (2.4–23) years and weight of 58 (18–195) kg with 15 patients having abnormal cardiac anatomy. Electrophysiology diagnoses for the + TC group included 30 accessory pathway–mediated tachycardia, 24 atrioventricular nodal reentrant tachycardia, and 7 other. Baseline generator settings included a power of 20 W, temperature of 40°, and 6 cc/min flow during lesion creation with 11 patients (19%) having alterations to parameters. Seventeen patients (30%) converted to an alternate ablation source. A total of 516 lesions were performed using the TC with a median contact force of 6 g, force‐time integral of 149 g·s, and lesion size index of 3.3. Median‐term follow‐up demonstrated 5 (10%) recurrences with no acute or median‐term complications.

TactiCath can be effectively employed in the treatment of pediatric patients with congenital heart disease with lower forces than previously described in the atrial fibrillation literature. Patients with atrioventricular nodal reentrant tachycardia or atrioventricular reciprocating tachycardia may not require transmural lesions and the TC may provide surrogate markers for success during slow pathway ablation.

Atsushi Ikeda,  Nicolas Aeby,  Hendrik Lambert … (2008)
An open-irrigated radiofrequency (RF) ablation catheter was developed to measure contact force (CF). Three optical fibers measure microdeformation of the catheter tip. The purpose of this study was to (1) validate the accuracy of CF sensor (CFS) (bench test); and (2) determine the relationship between CF and tissue temperatures, lesion size, steam pop, and thrombus during RF ablation using a canine thigh muscle preparation. CFS measurements (total 1409) from 2 catheters in 3 angles (perpendicular, parallel, and 45 degrees ) were compared with a certified balance (range, 0 to 50 g). CFS measurements correlated highly (R(2) > or =0.988; mean error, < or =1.0 g). In 10 anesthetized dogs, a skin cradle over the thigh muscle was superfused with heparinized blood at 37 degrees C. A 7F catheter with 3.5-mm saline-irrigated electrode and CFS (Endosense) was held perpendicular to the muscle at CF of 2, 10, 20, 30, and 40 g. RF was delivered (n=100) for 60 seconds at 30 or 50 W (irrigation 17 or 30 mL/min). Tissue temperature (3 and 7 mm depths), lesion size, thrombus, and steam pop increased significantly with increasing CF at each RF power. Lesion size was greater with applications of lower power (30 W) and greater CF (30 to 40 g) than at high power (50 W) with lower CF (2 to 10 g). This novel ablation catheter, which accurately measures CF, confirmed CF is a major determinant of RF lesion size. Steam pop and thrombus incidence also increases with CF. CFS in an open-irrigated ablation catheter that may optimize the selection of RF power and application time to maximize lesion formation and reduce the risk of steam pop and thrombus.

Electrical reconnection after pulmonary vein isolation is contingent on contact force during initial treatment: results from the EFFICAS I study.

Petr Neuzil,  Vivek Reddy,  Josef Kautzner … (2013)
Pulmonary vein isolation is the most prevalent approach for catheter ablation of paroxysmal atrial fibrillation. Long-term success of the procedure is diminished by arrhythmia recurrences occurring predominantly because of reconnections in previously isolated pulmonary veins. The aim of the EFFICAS I multicenter study was to demonstrate the correlation between contact force (CF) parameters during initial procedure and the incidence of isolation gaps (gap) at 3-month follow-up.