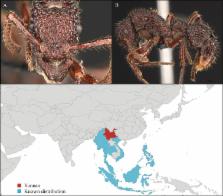 As with many other regions of the world, significant collecting, curation, and taxonomic efforts will be needed to complete the inventory of China’s ant fauna. This is especially true for the highly diverse tropical regions in the south of the country, where moist tropical forests harbor high species richness typical of the Southeast Asian region. We inventoried ants in the Xingshuangbanna prefecture, Yunnan, in June 2013, using a variety of methods including Winkler extraction and hand collection to sample ant diversity. We identified 213 species/morphospecies of ants from 10 subfamilies and 61 genera. After identification of 148 valid species of the 213 total species collected, 40 species represent new records for Yunnan province and 17 species are newly recorded for China. This increases the total number of named ant species in Yunnan and China to 447 and 951 respectively. The most common species collected were Brachyponera luteipes and Vollenhovia emeryi . Only one confirmed exotic species Strumigenys membranifera , was collected, although several others were potentially introduced by humans. These results highlight the high biodiversity value of the region, but also underscore how much work remains to fully document the native myrmecofauna.

A Comparison of the Efficacy of Litter Sifting and Pitfall Traps for Sampling Leaf Litter Ants (Hymenoptera, Formicidae) in a Tropical Wet Forest, Costa Rica

Global models of ant diversity suggest regions where new discoveries are most likely are under disproportionate deforestation threat.

Rob Dunn,  Benoit Guénard,  Michael Weiser (2012)
Most of the described and probably undescribed species on Earth are insects. Global models of species diversity rarely focus on insects and none attempt to address unknown, undescribed diversity. We assembled a database representing about 13,000 records for ant generic distribution from over 350 regions that cover much of the globe. Based on two models of diversity and endemicity, we identified regions where our knowledge of ant diversity is most limited, regions we have called "hotspots of discovery." A priori, such regions might be expected to be remote and untouched. Instead, we found that the hotspots of discovery are also the regions in which biodiversity is the most threatened by habitat destruction. Our results not only highlight the immediate need for conservation of the remaining natural habitats in these regions, but also the extent to which, by focusing on well-known groups such as vertebrates, we may fail to conserve the far greater diversity of the smaller species yet to be found.