Production of Verb Tense in Agrammatic Aphasia: A Meta-Analysis and Further Data 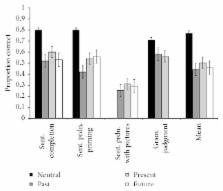 In a majority of languages, the time of an event is expressed by marking tense on the verb. There is substantial evidence that the production of verb tense in sentences is more severely impaired than other functional categories in persons with agrammatic aphasia. The underlying source of this verb tense impairment is less clear, particularly in terms of the relative contribution of conceptual-semantic and processing demands. This study aimed to provide a more precise characterization of verb tense impairment by examining if there is dissociation within tenses (due to conceptual-semantic differences) and an effect of experimental task (mediated by processing limitations). Two sources of data were used: a meta-analysis of published research (which yielded 143 datasets) and new data from 16 persons with agrammatic aphasia. Tensed verbs were significantly more impaired than neutral (nonfinite) verbs, but there were no consistent differences between past, present, and future tenses. Overall, tense accuracy was mediated by task, such that picture description task was the most challenging, relative to sentence completion, sentence production priming, and grammaticality judgment. An interaction between task and tense revealed a past tense disadvantage for a sentence production priming task. These findings indicate that verb tense impairment is exacerbated by processing demands of the elicitation task and the conceptual-semantic differences between tenses are too subtle to show differential performance in agrammatism.

Lectures on Government and Binding.

On the basis for the agrammatic's difficulty in producing main verbs.

G Villa,  A Caramazza,  G Miceli … (1984)
Current theories of agrammatism do not provide a clear explanation for the co-occurrence of omission of grammatical markers and main verbs in this disorder. This study tested the hypothesis that the two symptom features have distinct underlying causes. Specifically, that the omission of main verbs in agrammatic speech is caused, at least in part, by a lexical (as opposed to a syntactic) deficit. Agrammatic and anomic aphasics and normal controls were given an object and action naming test. Agrammatic patients showed a marked impairment in naming actions in contrast to anomic aphasics and normal controls who named actions better than objects. The action naming impairment in agrammatic patients was interpreted as evidence for the lexical deficit hypothesis of verb omission in the speech of these patients and as a demonstration that agrammatism is a heterogeneous disorder that implicates damage to both lexical and syntactic mechanisms.