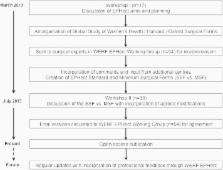 Publisher: Elsevier for the American Society for Reproductive Medicine

To standardize the recording of surgical phenotypic information on endometriosis and related sample collections obtained at laparoscopy, allowing large-scale collaborative research into the condition.

Two workshops were conducted in 2013, bringing together 54 clinical, academic, and industry leaders in endometriosis research and management worldwide.

A postsurgical scoring sheet containing general and gynecological patient and procedural information, extent of disease, the location and type of endometriotic lesion, and any other findings was developed during several rounds of review. Comments and any systematic surgical data collection tools used in the reviewers' centers were incorporated.

The development of a standard recommended (SSF) and minimum required (MSF) form to collect data on the surgical phenotype of endometriosis.

SSF and MSF include detailed descriptions of lesions, modes of procedures and sample collection, comorbidities, and potential residual disease at the end of surgery, along with previously published instruments such as the revised American Society for Reproductive Medicine and Endometriosis Fertility Index classification tools for comparison and validation.

This is the first multicenter, international collaboration between academic centers and industry addressing standardization of phenotypic data collection for a specific disease. The Endometriosis Phenome and Biobanking Harmonisation Project SSF and MSF are essential tools to increase our understanding of the pathogenesis of endometriosis by allowing large-scale collaborative research into the condition.

Akiko Mammoto,  Tadanori Mammoto,  Donald E. Ingber (2012)
Transcriptional regulation contributes to the maintenance of pluripotency, self-renewal and differentiation in embryonic cells and in stem cells. Therefore, control of gene expression at the level of transcription is crucial for embryonic development, as well as for organogenesis, functional adaptation, and regeneration in adult tissues and organs. In the past, most work has focused on how transcriptional regulation results from the complex interplay between chemical cues, adhesion signals, transcription factors and their co-regulators during development. However, chemical signaling alone is not sufficient to explain how three-dimensional (3D) tissues and organs are constructed and maintained through the spatiotemporal control of transcriptional activities. Accumulated evidence indicates that mechanical cues, which include physical forces (e.g. tension, compression or shear stress), alterations in extracellular matrix (ECM) mechanics and changes in cell shape, are transmitted to the nucleus directly or indirectly to orchestrate transcriptional activities that are crucial for embryogenesis and organogenesis. In this Commentary, we review how the mechanical control of gene transcription contributes to the maintenance of pluripotency, determination of cell fate, pattern formation and organogenesis, as well as how it is involved in the control of cell and tissue function throughout embryogenesis and adult life. A deeper understanding of these mechanosensitive transcriptional control mechanisms should lead to new approaches to tissue engineering and regenerative medicine.

Consensus on current management of endometriosis.

Peter Rogers,  Thomas M. D’Hooghe,  Asgerally Fazleabas … (2009)
Endometriosis is an estrogen-dependent disorder where endometrial tissue forms lesions outside the uterus. Endometriosis affects an estimated 10% of women in the reproductive-age group, rising to 30% to 50% in patients with infertility and/or pain, with significant impact on their physical, mental, and social well-being. There is no known cure, and most current medical treatments are not suitable long term due to their side-effect profiles. Endometriosis has an estimated annual cost in the United States of $18.8 to $22 billion (2002 figures). Although endometriosis was first described more than 100 years ago, current knowledge of its pathogenesis, spontaneous evolution, and the pathophysiology of the related infertility and pelvic pain, remain unclear. A consensus workshop was convened following the 10th World Congress on Endometriosis to establish recommendations for priorities in endometriosis research. One major issue identified as impacting on the capacity to undertake endometriosis research is the need for multidisciplinary expertise. A total of 25 recommendations for research have been developed, grouped under 5 subheadings: (1) diagnosis, (2) classification and prognosis, (3) treatment and outcome, (4) epidemiology, and (5) pathophysiology. Endometriosis research is underfunded relative to other diseases with high health care burdens. This may be due to the practical difficulties of developing competitive research proposals on a complex and poorly understood disease, which affects only women. By producing this consensus international research priorities statement it is the hope of the workshop participants that researchers will be encouraged to develop new interdisciplinary research proposals that will attract increased funding support for work on endometriosis.