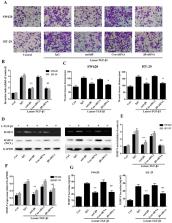 Stephan Huveneers,  H J Danen (2009)
Interactions between cells and the extracellular matrix coordinate signaling pathways that control various aspects of cellular behavior. Integrins sense the physical properties of the extracellular matrix and organize the cytoskeleton accordingly. In turn, this modulates signaling pathways that are triggered by various other transmembrane receptors and augments the cellular response to growth factors. Over the past years, it has become clear that there is extensive crosstalk between integrins, Src-family kinases and Rho-family GTPases at the heart of such adhesion signaling. In this Commentary, we discuss recent advances in our understanding of the dynamic regulation of the molecular connections between these three protein families. We also discuss how this signaling network can regulate a range of cellular processes that are important for normal tissue function and disease, including cell adhesion, spreading, migration and mechanotransduction.

Eniola Abe,  David Loskutoff,  I Nunes … (1994)
Transforming growth factor-beta (TGF-beta) is a potent regulator of cellular differentiation, proliferation, migration, and protein expression. These properties have been exploited to create a variety of bioassays for detecting the mature growth factor. In this paper, we describe a highly sensitive and specific, nonradioactive quantitative bioassay for TGF-beta based on its ability to induce plasminogen activator inhibitor-1 (PAI-1) expression. Mink lung epithelial cells (MLEC) were stably transfected with an expression construct containing a truncated PAI-1 promoter fused to the firefly luciferase reporter gene. Addition of TGF-beta (0.2 to > 30 pM) to the transfectants resulted in a dose-dependent increase in luciferase activity in the cell lysates. Although responsive to TGF-beta, this promoter fragment was only minimally influenced by other known inducers of PAI-1 expression. When compared to the widely used MLEC assay, this assay demonstrated greater sensitivity and specificity, allowing quantification of TGF-beta in complex biological solutions.

Integrins as biomechanical sensors of the microenvironment