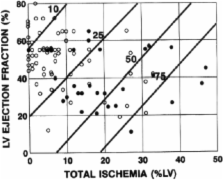 This review summarises the evidence for the role of myocardial perfusion scintigraphy (MPS) in patients with known or suspected coronary artery disease. It is the product of a consensus conference organised by the British Cardiac Society, the British Nuclear Cardiology Society and the British Nuclear Medicine Society and is endorsed by the Royal College of Physicians of London and the Royal College of Radiologists. It was used to inform the UK National Institute of Clinical Excellence in their appraisal of MPS in patients with chest pain and myocardial infarction. MPS is a well-established, non-invasive imaging technique with a large body of evidence to support its effectiveness in the diagnosis and management of angina and myocardial infarction. It is more accurate than the exercise ECG in detecting myocardial ischaemia and it is the single most powerful technique for predicting future coronary events. The high diagnostic accuracy of MPS allows reliable risk stratification and guides the selection of patients for further interventions, such as revascularisation. This in turn allows more appropriate utilisation of resources, with the potential for both improved clinical outcomes and greater cost-effectiveness. Evidence from modelling and observational studies supports the enhanced cost-effectiveness associated with MPS use. In patients presenting with stable or acute chest pain, strategies of investigation involving MPS are more cost-effective than those not using the technique. MPS also has particular advantages over alternative techniques in the management of a number of patient subgroups, including women, the elderly and those with diabetes, and its use will have a favourable impact on cost-effectiveness in these groups. MPS is already an integral part of many clinical guidelines for the investigation and management of angina and myocardial infarction. However, the technique is underutilised in the UK, as judged by the inappropriately long waiting times and by comparison with the numbers of revascularisations and coronary angiograms performed. Furthermore, MPS activity levels in this country fall far short of those in comparable European countries, with about half as many scans being undertaken per year. Currently, the number of MPS studies performed annually in the UK is 1,200/million population/year. We estimate the real need to be 4,000/million/year. The current average waiting time is 20 weeks and we recommend that clinically appropriate upper limits of waiting time are 6 weeks for routine studies and 1 week for urgent studies.

Comparison of early invasive and conservative strategies in patients with unstable coronary syndromes treated with the glycoprotein IIb/IIIa inhibitor tirofiban.

Towards complete and accurate reporting of studies of diagnostic accuracy: the STARD initiative

ACC/AHA guidelines for coronary angiography. A report of the American College of Cardiology/American Heart Association Task Force on practice guidelines (Committee on Coronary Angiography). Developed in collaboration with the Society for Cardiac Angiography and Interventions.