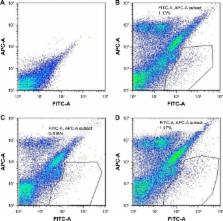 COPD is a leading cause of mortality worldwide, and cigarette smoke is a pivotal risk factor. Adenovirus is a common cause of acute exacerbations of COPD and expedites COPD progression. Lung stem/progenitor cells play an important role in the development of COPD, while the relevant mechanism remains elusive. Here, we investigated the number of lung CD31 −CD45 −Sca-1 + cells and sonic hedgehog (Shh) signaling pathway expression levels in cigarette smoke extract (CSE)-induced emphysema mice, as well as the relevant effects of acute adenovirus infection (AAI).

CSE intraperitoneal injection and adenovirus endotracheal instillation successfully induced emphysema and AAI in mice, respectively. In the lungs of emphysema mice, both the number of CD31 −CD45 −Sca-1 + cells and expression levels of Shh signaling pathway molecules were reduced. However, AAI increased the number of inhibited CD31 −CD45 −Sca-1 + cells and activated the suppression of the Shh signaling pathway.

Both CD31 −CD45 −Sca-1 + cell numbers and Shh signaling pathway expression levels were downregulated in the lungs of emphysema mice induced by CSE intraperitoneal injection, which likely contributes to the pathogenesis of emphysema. Additionally, these inhibited lung CD31 −CD45 −Sca-1 + cells and Shh signaling pathway molecules were upregulated during AAI, indicating that they play a protective role in the epithelial repair process after AAI injury.

D. Neil Watkins,  David Berman,  Scott Burkholder … (2003)
Embryonic signalling pathways regulate progenitor cell fates in mammalian epithelial development and cancer. Prompted by the requirement for sonic hedgehog (Shh) signalling in lung development, we investigated a role for this pathway in regeneration and carcinogenesis of airway epithelium. Here we demonstrate extensive activation of the hedgehog (Hh) pathway within the airway epithelium during repair of acute airway injury. This mode of Hh signalling is characterized by the elaboration and reception of the Shh signal within the epithelial compartment, and immediately precedes neuroendocrine differentiation. We reveal a similar pattern of Hh signalling in airway development during normal differentiation of pulmonary neuroendocrine precursor cells, and in a subset of small-cell lung cancer (SCLC), a highly aggressive and frequently lethal human tumour with primitive neuroendocrine features. These tumours maintain their malignant phenotype in vitro and in vivo through ligand-dependent Hh pathway activation. We propose that some types of SCLC might recapitulate a critical, Hh-regulated event in airway epithelial differentiation. This requirement for Hh pathway activation identifies a common lethal malignancy that may respond to pharmacological blockade of the Hh signalling pathway.

Philip A. Beachy,  S Karhadkar,  Helen Berman (2004)
Cancer is increasingly being viewed as a stem cell disease, both in its propagation by a minority of cells with stem-cell-like properties and in its possible derivation from normal tissue stem cells. But stem cell activity is tightly controlled, raising the question of how normal regulation might be subverted in carcinogenesis. The long-known association between cancer and chronic tissue injury, and the more recently appreciated roles of Hedgehog and Wnt signalling pathways in tissue regeneration, stem cell renewal and cancer growth together suggest that carcinogenesis proceeds by misappropriating homeostatic mechanisms that govern tissue repair and stem cell self-renewal.

Stephan Teglund,  Rune Toftgård (2010)
The Hedgehog (Hh) signaling pathway is of central importance during embryo development in metazoans and governs a diverse array of processes including cell proliferation, differentiation, and tissue patterning. In normal adult physiology, the pathway is implicated in stem cell maintenance, tissue repair and regeneration. However, the pathway's darker side is its involvement in several types of human cancer, to which it confers growth promoting and/or survival capabilities to the cancer cell to varying degrees, and by different mechanisms. The Hh pathway is firmly linked to the etiology of basal cell carcinoma and to at least a subset of medulloblastoma. There is increasing evidence that other sporadic cancers, including those in pancreas, prostate, lung, and breast, could also be dependent on Hh pathway activity. In this review, we provide an overview of the pathway's role in various tumor types, where much of the framework for Hh-dependent malignancies has been elucidated in experimental mouse models. We discuss three different signal transduction models for the pathway's involvement in cancer: i) ligand-independent signaling, ii) ligand-dependent autocrine/juxtacrine signaling, and iii) ligand-dependent paracrine signaling. These different modes of signaling may have implications for future therapeutic interventions aimed at inhibiting the pathway during disease. In addition, crosstalk with other pathways, and indications of non-canonical Hh signaling in cancer cells may further cause complications, or perhaps possibilities, in the treatment regimen. Finally, we review the rapid progress and promising results in the development of small-molecule inhibitors of the Hh pathway.