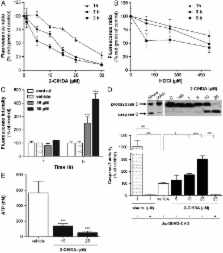 2-Chlorohexadecanal (2-ClHDA), a chlorinated fatty aldehyde, is formed via attack on ether-phospholipids by hypochlorous acid (HOCl) that is generated by the myeloperoxidase–hydrogen peroxide–chloride system of activated leukocytes. 2-ClHDA levels are elevated in atherosclerotic lesions, myocardial infarction, and neuroinflammation. Neuroinflammatory conditions are accompanied by accumulation of neutrophils (an ample source of myeloperoxidase) in the brain. Microvessel damage by inflammatory mediators and/or reactive oxidants can induce blood–brain barrier (BBB) dysfunction, a pathological condition leading to cerebral edema, brain hemorrhage, and neuronal death. In this in vitro study we investigated the impact of 2-ClHDA on brain microvascular endothelial cells (BMVEC), which constitute the morphological basis of the BBB. We show that exogenously added 2-ClHDA is subject to rapid uptake and metabolism by BMVEC. Using C16 structural analogues of 2-ClHDA we found that the cytotoxic potential decreases in the following order: 2-ClHDA>hexadecanal>palmitic acid>2-ClHDA-dimethylacetal. 2-ClHDA induces loss of barrier function, mitochondrial dysfunction, apoptosis via activation of caspase 3, and altered intracellular redox balance. Finally we investigated potential protective effects of several natural polyphenols on in vitro BBB function. Of the compounds tested, phloretin almost completely abrogated 2-ClHDA-induced BMVEC barrier dysfunction and cell death. These data suggest that 2-ClHDA has the potential to induce BBB breakdown under inflammatory conditions and that phloretin confers protection in this experimental setting.

The blood-brain barrier in health and chronic neurodegenerative disorders.

Berislav Zlokovic (2008)
The blood-brain barrier (BBB) is a highly specialized brain endothelial structure of the fully differentiated neurovascular system. In concert with pericytes, astrocytes, and microglia, the BBB separates components of the circulating blood from neurons. Moreover, the BBB maintains the chemical composition of the neuronal "milieu," which is required for proper functioning of neuronal circuits, synaptic transmission, synaptic remodeling, angiogenesis, and neurogenesis in the adult brain. BBB breakdown, due to disruption of the tight junctions, altered transport of molecules between blood and brain and brain and blood, aberrant angiogenesis, vessel regression, brain hypoperfusion, and inflammatory responses, may initiate and/or contribute to a "vicious circle" of the disease process, resulting in progressive synaptic and neuronal dysfunction and loss in disorders such as Alzheimer's disease, Parkinson's disease, amyotrophic lateral sclerosis, multiple sclerosis, and others. These findings support developments of new therapeutic approaches for chronic neurodegenerative disorders directed at the BBB and other nonneuronal cells of the neurovascular unit.

The blood-brain barrier/neurovascular unit in health and disease.

thomas davis,  Troy B. Hawkins (2005)
The blood-brain barrier (BBB) is the regulated interface between the peripheral circulation and the central nervous system (CNS). Although originally observed by Paul Ehrlich in 1885, the nature of the BBB was debated well into the 20th century. The anatomical substrate of the BBB is the cerebral microvascular endothelium, which, together with astrocytes, pericytes, neurons, and the extracellular matrix, constitute a "neurovascular unit" that is essential for the health and function of the CNS. Tight junctions (TJ) between endothelial cells of the BBB restrict paracellular diffusion of water-soluble substances from blood to brain. The TJ is an intricate complex of transmembrane (junctional adhesion molecule-1, occludin, and claudins) and cytoplasmic (zonula occludens-1 and -2, cingulin, AF-6, and 7H6) proteins linked to the actin cytoskeleton. The expression and subcellular localization of TJ proteins are modulated by several intrinsic signaling pathways, including those involving calcium, phosphorylation, and G-proteins. Disruption of BBB TJ by disease or drugs can lead to impaired BBB function and thus compromise the CNS. Therefore, understanding how BBB TJ might be affected by various factors holds significant promise for the prevention and treatment of neurological diseases.