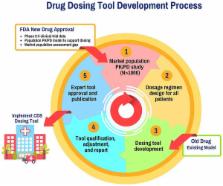 A new initiative on precision medicine.

Francis Collins,  Harold E. Varmus (2015)
President Obama has announced a research initiative that aims to accelerate progress toward a new era of precision medicine, with a near-term focus on cancers and a longer-term aim to generate knowledge applicable to the whole range of health and disease.

Incidence of adverse drug reactions in hospitalized patients: a meta-analysis of prospective studies.

J Lazarou,  B H Pomeranz,  P N Corey (1998)
To estimate the incidence of serious and fatal adverse drug reactions (ADR) in hospital patients. Four electronic databases were searched from 1966 to 1996. Of 153, we selected 39 prospective studies from US hospitals. Data extracted independently by 2 investigators were analyzed by a random-effects model. To obtain the overall incidence of ADRs in hospitalized patients, we combined the incidence of ADRs occurring while in the hospital plus the incidence of ADRs causing admission to hospital. We excluded errors in drug administration, noncompliance, overdose, drug abuse, therapeutic failures, and possible ADRs. Serious ADRs were defined as those that required hospitalization, were permanently disabling, or resulted in death. The overall incidence of serious ADRs was 6.7% (95% confidence interval [CI], 5.2%-8.2%) and of fatal ADRs was 0.32% (95% CI, 0.23%-0.41%) of hospitalized patients. We estimated that in 1994 overall 2216000 (1721000-2711000) hospitalized patients had serious ADRs and 106000 (76000-137000) had fatal ADRs, making these reactions between the fourth and sixth leading cause of death. The incidence of serious and fatal ADRs in US hospitals was found to be extremely high. While our results must be viewed with circumspection because of heterogeneity among studies and small biases in the samples, these data nevertheless suggest that ADRs represent an important clinical issue.

Developmental pharmacology--drug disposition, action, and therapy in infants and children.