To further understand attachment site preferences of common ticks of horses, and to document the seasonality of equine tick infestation in northeastern Oklahoma, horses from eight farms were evaluated twice a month over a 1-year period. Each horse was systematically inspected beginning at the head and moving caudally to the tail. Attachment sites of ticks were recorded and all ticks collected were identified to species and stage.

This research confirms that ticks common on horses in North America have attachment site preferences and that ticks infest horses in Oklahoma throughout the year, including during the winter. Additional research is warranted to fully understand the risk these infestations pose to equine health. 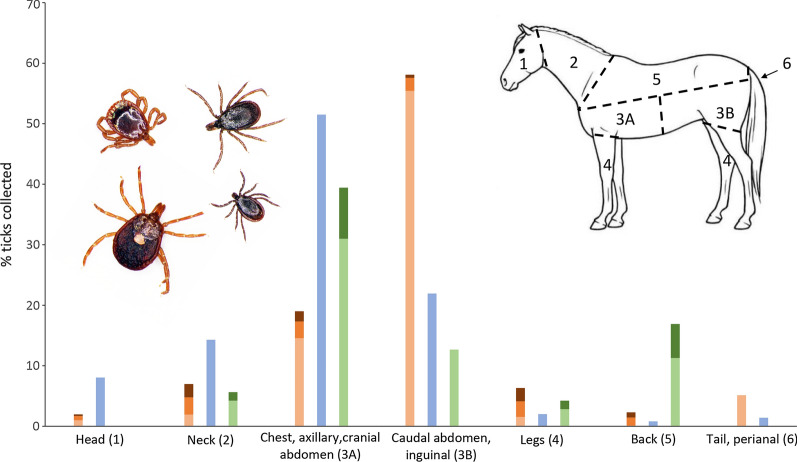 Daniel Sonenshine (2018)
Ticks are the major vectors of most disease-causing agents to humans, companion animals and wildlife. Moreover, ticks transmit a greater variety of pathogenic agents than any other blood-feeding arthropod. Ticks have been expanding their geographic ranges in recent decades largely due to climate change. Furthermore, tick populations in many areas of their past and even newly established localities have increased in abundance. These dynamic changes present new and increasing severe public health threats to humans, livestock and companion animals in areas where they were previously unknown or were considered to be of minor importance. Here in this review, the geographic status of four representative tick species are discussed in relation to these public health concerns, namely, the American dog tick, Dermacentor variabilis, the lone star tick, Amblyomma americanum, the Gulf Coast Tick, Amblyomma maculatum and the black-legged tick, Ixodes scapularis. Both biotic and abiotic factors that may influence future range expansion and successful colony formation in new habitats are discussed.

J. Keirans, T Litwak (1989)
Six genera and 27 species of hard ticks (Ixodidae) currently are recognized in the United States east of the Mississippi River as follows: Amblyomma (4 species), Boophilus (1), Dermacentor (3), Haemaphysalis (2), Ixodes (16), and Rhipicephalus (1). We present a diagrammatic couplet key to the adults of the six genera and 27 species of Ixodidae found in the eastern portion of the United States.

Illustrated key to nymphs of the tick genus Amblyomma (Acari: Ixodidae) found in the United States.

J. Keirans, L A Durden (1998)
A dichotomous identification key, with important characters illustrated by scanning electron micrographs, is provided for nymphs of the 9 species of the genus Amblyomma occurring in the United States. Species included are A. americanum (L.), A. cajennense (F.), A. dissimile Koch, A. imitator Kohls, A. inornatum (Banks), A. longirostre (Koch), A maculatum Koch, A. rotundatum Koch, and A. tuberculatum Marx. Notes on the geographical distributions, medical and veterinary importance, and nymphal stage hosts are included for each species.