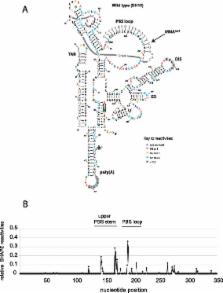 tRNA Lys3 annealing to the viral RNA of human immunodeficiency virus type-1 (HIV-1) is an essential step in the virus life cycle, because this tRNA serves as the primer for initiating reverse transcription. tRNA Lys3 annealing to viral RNA occurs in two steps. First, Gag promotes annealing of tRNA Lys3 to the viral RNA during cytoplasmic HIV-1 assembly. Second, mature nucleocapsid (NCp7), produced from the processing of Gag by viral protease during viral budding from the cell, remodels the annealed complex to form a more stable interaction between the viral RNA and tRNA Lys3, resulting in a more tightly bound and efficient primer for reverse transcription.

In this report, we have used in virio SHAPE analysis of both the 5´-untranslated region in HIV-1 RNA and the annealed tRNA Lys3 to determine structural differences of the annealed complex that occur between protease-negative (Pr-) and wild type viruses. Our results indicate that the weaker binding of tRNA Lys3 annealed by Gag in Pr- virions reflects both missing interactions of tRNA Lys3 with viral RNA regions in the upper PBS stem, and a weaker interaction with the internal stem-loop found within the unannealed primer binding site in viral RNA.

We propose secondary structure models for the tRNA Lys3/viral RNA annealed complexes in PR- and wild type viruses that support the two-step annealing model by showing that Gag promotes a partial annealing of tRNA Lys3 to HIV-1 viral RNA, followed by a more complete annealing by NCp7.

Role of capsid precursor processing and myristoylation in morphogenesis and infectivity of human immunodeficiency virus type 1.

H Gottlinger,  W Haseltine,  J Sodroski (1989)
The effects on human immunodeficiency virus type 1 virion morphogenesis and on virus replication of mutations that affect posttranslational processing of the capsid precursor protein are described. A change in the glycine residue at position two from the N terminus abolishes the myristoylation of the precursor proteins and also prevents virus particle release. Mutations in the viral protease gene abolish proteolytic cleavage of the capsid precursor but do not prevent the formation and budding of virion particles of immature appearance. Mutations that alter the sequence of the sites normally used for cleavage of the major capsid protein p24 from the capsid precursor alter virion morphogenesis and prevent virus replication.

Flexible nature and specific functions of the HIV-1 nucleocapsid protein.

Jean-Luc Darlix,  Roland Ivanyi-Nagy,  Philippe Fossé … (2011)
One salient feature of reverse transcription in retroviruses, notably in the human immunodeficiency virus type 1, is that it requires the homologous nucleocapsid (NC) protein acting as a chaperoning partner of the genomic RNA template and the reverse transcriptase, from the initiation to the completion of viral DNA synthesis. This short review on the NC protein of human immunodeficiency virus type 1 aims at briefly presenting the flexible nature of NC protein, how it interacts with nucleic acids via its invariant zinc fingers and flanking basic residues, and the possible mechanisms that account for its multiple functions in the early steps of virus replication, notably in the obligatory strand transfer reactions during viral DNA synthesis by the reverse transcriptase enzyme. Copyright © 2011 Elsevier Ltd. All rights reserved.