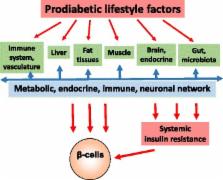 Environmental and lifestyle changes, in addition to the ageing of populations, are generally believed to account for the rapid global increase in type 2 diabetes prevalence and incidence in recent decades.

In this review, we present a comprehensive overview of factors contributing to diabetes risk, including aspects of diet quality and quantity, little physical activity, increased monitor viewing time or sitting in general, exposure to noise or fine dust, short or disturbed sleep, smoking, stress and depression, and a low socioeconomic status. In general, these factors promote an increase in body mass index. Since loss of β-cell function is the ultimate cause of developing overt type 2 diabetes, environmental and lifestyle changes must have resulted in a higher risk of β-cell damage in those at genetic risk. Multiple mechanistic pathways may come into play.

Strategies of diabetes prevention should aim at promoting a ‘diabetes-protective lifestyle’ whilst simultaneously enhancing the resistance of the human organism to pro-diabetic environmental and lifestyle factors. More research on diabetes-protective mechanisms seems warranted.

Global, regional, and national prevalence of overweight and obesity in children and adults during 1980-2013: a systematic analysis for the Global Burden of Disease Study 2013.

Marie Ng,  Tom Fleming,  Margaret Robinson … (2015)
In 2010, overweight and obesity were estimated to cause 3·4 million deaths, 3·9% of years of life lost, and 3·8% of disability-adjusted life-years (DALYs) worldwide. The rise in obesity has led to widespread calls for regular monitoring of changes in overweight and obesity prevalence in all populations. Comparable, up-to-date information about levels and trends is essential to quantify population health effects and to prompt decision makers to prioritise action. We estimate the global, regional, and national prevalence of overweight and obesity in children and adults during 1980-2013. We systematically identified surveys, reports, and published studies (n=1769) that included data for height and weight, both through physical measurements and self-reports. We used mixed effects linear regression to correct for bias in self-reports. We obtained data for prevalence of obesity and overweight by age, sex, country, and year (n=19,244) with a spatiotemporal Gaussian process regression model to estimate prevalence with 95% uncertainty intervals (UIs). Worldwide, the proportion of adults with a body-mass index (BMI) of 25 kg/m(2) or greater increased between 1980 and 2013 from 28·8% (95% UI 28·4-29·3) to 36·9% (36·3-37·4) in men, and from 29·8% (29·3-30·2) to 38·0% (37·5-38·5) in women. Prevalence has increased substantially in children and adolescents in developed countries; 23·8% (22·9-24·7) of boys and 22·6% (21·7-23·6) of girls were overweight or obese in 2013. The prevalence of overweight and obesity has also increased in children and adolescents in developing countries, from 8·1% (7·7-8·6) to 12·9% (12·3-13·5) in 2013 for boys and from 8·4% (8·1-8·8) to 13·4% (13·0-13·9) in girls. In adults, estimated prevalence of obesity exceeded 50% in men in Tonga and in women in Kuwait, Kiribati, Federated States of Micronesia, Libya, Qatar, Tonga, and Samoa. Since 2006, the increase in adult obesity in developed countries has slowed down. Because of the established health risks and substantial increases in prevalence, obesity has become a major global health challenge. Not only is obesity increasing, but no national success stories have been reported in the past 33 years. Urgent global action and leadership is needed to help countries to more effectively intervene. Bill & Melinda Gates Foundation. Copyright © 2014 Elsevier Ltd. All rights reserved.

Prevention of type 2 diabetes mellitus by changes in lifestyle among subjects with impaired glucose tolerance.

Worldwide trends in diabetes since 1980: a pooled analysis of 751 population-based studies with 4·4 million participants

Emily Sonestedt (2016)
Summary Background One of the global targets for non-communicable diseases is to halt, by 2025, the rise in the age-standardised adult prevalence of diabetes at its 2010 levels. We aimed to estimate worldwide trends in diabetes, how likely it is for countries to achieve the global target, and how changes in prevalence, together with population growth and ageing, are affecting the number of adults with diabetes. Methods We pooled data from population-based studies that had collected data on diabetes through measurement of its biomarkers. We used a Bayesian hierarchical model to estimate trends in diabetes prevalence—defined as fasting plasma glucose of 7·0 mmol/L or higher, or history of diagnosis with diabetes, or use of insulin or oral hypoglycaemic drugs—in 200 countries and territories in 21 regions, by sex and from 1980 to 2014. We also calculated the posterior probability of meeting the global diabetes target if post-2000 trends continue. Findings We used data from 751 studies including 4 372 000 adults from 146 of the 200 countries we make estimates for. Global age-standardised diabetes prevalence increased from 4·3% (95% credible interval 2·4–7·0) in 1980 to 9·0% (7·2–11·1) in 2014 in men, and from 5·0% (2·9–7·9) to 7·9% (6·4–9·7) in women. The number of adults with diabetes in the world increased from 108 million in 1980 to 422 million in 2014 (28·5% due to the rise in prevalence, 39·7% due to population growth and ageing, and 31·8% due to interaction of these two factors). Age-standardised adult diabetes prevalence in 2014 was lowest in northwestern Europe, and highest in Polynesia and Micronesia, at nearly 25%, followed by Melanesia and the Middle East and north Africa. Between 1980 and 2014 there was little change in age-standardised diabetes prevalence in adult women in continental western Europe, although crude prevalence rose because of ageing of the population. By contrast, age-standardised adult prevalence rose by 15 percentage points in men and women in Polynesia and Micronesia. In 2014, American Samoa had the highest national prevalence of diabetes (>30% in both sexes), with age-standardised adult prevalence also higher than 25% in some other islands in Polynesia and Micronesia. If post-2000 trends continue, the probability of meeting the global target of halting the rise in the prevalence of diabetes by 2025 at the 2010 level worldwide is lower than 1% for men and is 1% for women. Only nine countries for men and 29 countries for women, mostly in western Europe, have a 50% or higher probability of meeting the global target. Interpretation Since 1980, age-standardised diabetes prevalence in adults has increased, or at best remained unchanged, in every country. Together with population growth and ageing, this rise has led to a near quadrupling of the number of adults with diabetes worldwide. The burden of diabetes, both in terms of prevalence and number of adults affected, has increased faster in low-income and middle-income countries than in high-income countries. Funding Wellcome Trust.