Mechanism of Quinolone Action and Resistance 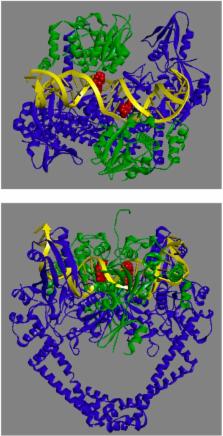 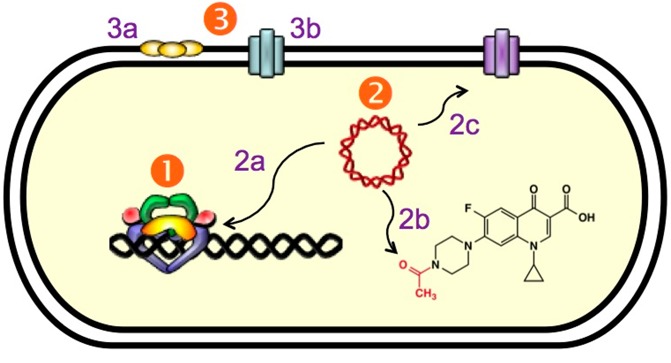 Quinolones are one of the most commonly prescribed classes of antibacterials in the world and are used to treat a variety of bacterial infections in humans. Because of the wide use (and overuse) of these drugs, the number of quinolone-resistant bacterial strains has been growing steadily since the 1990s. As is the case with other antibacterial agents, the rise in quinolone resistance threatens the clinical utility of this important drug class. Quinolones act by converting their targets, gyrase and topoisomerase IV, into toxic enzymes that fragment the bacterial chromosome. This review describes the development of the quinolones as antibacterials, the structure and function of gyrase and topoisomerase IV, and the mechanistic basis for quinolone action against their enzyme targets. It will then discuss the following three mechanisms that decrease the sensitivity of bacterial cells to quinolones. Target-mediated resistance is the most common and clinically significant form of resistance. It is caused by specific mutations in gyrase and topoisomerase IV that weaken interactions between quinolones and these enzymes. Plasmid-mediated resistance results from extrachromosomal elements that encode proteins that disrupt quinolone–enzyme interactions, alter drug metabolism, or increase quinolone efflux. Chromosome-mediated resistance results from the underexpression of porins or the overexpression of cellular efflux pumps, both of which decrease cellular concentrations of quinolones. Finally, this review will discuss recent advancements in our understanding of how quinolones interact with gyrase and topoisomerase IV and how mutations in these enzymes cause resistance. These last findings suggest approaches to designing new drugs that display improved activity against resistant strains.

Plasmids and the spread of resistance.

Alessandra Carattoli (2013)
Plasmids represent one of the most difficult challenge for counteracting the dissemination of antimicrobial resistance. They contribute to the spread of relevant resistance determinants, promoting horizontal gene transfer among unrelated bacteria. Undistinguishable plasmids were identified in unrelated bacterial strains isolated at huge geographically distant area, with no apparent epidemiological links. These plasmids belong to families that are largely prevalent in naturally occurring bacteria, usually carry multiple physically linked genetic determinants, conferring resistance to different classes of antibiotics simultaneously. Plasmids also harbour virulence factors and addiction systems, promoting their stability and maintenance in the bacterial host, in different environmental conditions. The characteristics of the most successful plasmids that were at the origin of the spread of carbapenemase, expanded-spectrum β-lactamase, and plasmid-mediated quinolone resistance genes are discussed in this review. Copyright © 2013 Elsevier GmbH. All rights reserved.

Ari Robicsek,  David Hooper,  G Jacoby … (2006)
Fluoroquinolone resistance is emerging in gram-negative pathogens worldwide. The traditional understanding that quinolone resistance is acquired only through mutation and transmitted only vertically does not entirely account for the relative ease with which resistance develops in exquisitely susceptible organisms, or for the very strong association between resistance to quinolones and to other agents. The recent discovery of plasmid-mediated horizontally transferable genes encoding quinolone resistance might shed light on these phenomena. The Qnr proteins, capable of protecting DNA gyrase from quinolones, have homologues in water-dwelling bacteria, and seem to have been in circulation for some time, having achieved global distribution in a variety of plasmid environments and bacterial genera. AAC(6')-Ib-cr, a variant aminoglycoside acetyltransferase capable of modifying ciprofloxacin and reducing its activity, seems to have emerged more recently, but might be even more prevalent than the Qnr proteins. Both mechanisms provide low-level quinolone resistance that facilitates the emergence of higher-level resistance in the presence of quinolones at therapeutic levels. Much remains to be understood about these genes, but their insidious promotion of substantial resistance, their horizontal spread, and their co-selection with other resistance elements indicate that a more cautious approach to quinolone use and a reconsideration of clinical breakpoints are needed.

Karl Drlica,  Xilin Zhao (1997)
For many years, DNA gyrase was thought to be responsible both for unlinking replicated daughter chromosomes and for controlling negative superhelical tension in bacterial DNA. However, in 1990 a homolog of gyrase, topoisomerase IV, that had a potent decatenating activity was discovered. It is now clear that topoisomerase IV, rather than gyrase, is responsible for decatenation of interlinked chromosomes. Moreover, topoisomerase IV is a target of the 4-quinolones, antibacterial agents that had previously been thought to target only gyrase. The key event in quinolone action is reversible trapping of gyrase-DNA and topoisomerase IV-DNA complexes. Complex formation with gyrase is followed by a rapid, reversible inhibition of DNA synthesis, cessation of growth, and induction of the SOS response. At higher drug concentrations, cell death occurs as double-strand DNA breaks are released from trapped gyrase and/or topoisomerase IV complexes. Repair of quinolone-induced DNA damage occurs largely via recombination pathways. In many gram-negative bacteria, resistance to moderate levels of quinolone arises from mutation of the gyrase A protein and resistance to high levels of quinolone arises from mutation of a second gyrase and/or topoisomerase IV site. For some gram-positive bacteria, the situation is reversed: primary resistance occurs through changes in topoisomerase IV while gyrase changes give additional resistance. Gyrase is also trapped on DNA by lethal gene products of certain large, low-copy-number plasmids. Thus, quinolone-topoisomerase biology is providing a model for understanding aspects of host-parasite interactions and providing ways to investigate manipulation of the bacterial chromosome by topoisomerases.