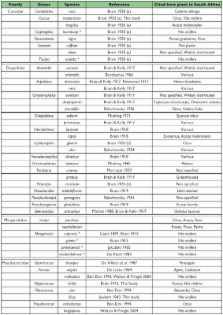 Increasing international trade and tourism have led to an increase in the introduction of exotic pests that pose a considerable economic threat to the agro-ecosystems of importing countries. Scale insects (Sternorryncha: Coccoidea) may be contaminants of export consignments from the South African deciduous fruit industry to the European Union, Israel, United Kingdom and the United States, for example. Infestations of immature scale insects found on South African fruit destined for export have resulted in increasing rates of rejection of such consignments. To identify the risk posed by scale insect species listed as phytosanitary pests on table grapes to the abovementioned importing countries, a field survey was undertaken in 2004–2005 in vineyards throughout all grape-producing regions in South Africa. Coccoidea species found during the current field survey were Planococcus ficus (Signoret), Pseudococcus longispinus (Targioni Tozzetti), Coccus hesperidum L. and Nipaecoccus viridis (Newstead). With the exception of Pl. ficus, which has only been collected from Vitis vinifera (Vitaceae) and Ficus carica (Moraceae) in South Africa, these species are polyphagous and have a wide host range. None of the scale insect species found to occur in vineyards in South Africa pose a phytosanitary risk to countries where fruit are exported except for Ferrisia malvastra (McDaniel) and N. viridis that have not been recorded in the USA. All scale insects previously found in vineyards in South Africa are listed and their phytosanitary status discussed. The results of the survey show that the risk of exporting scale insect pests of phytosanitary importance on table grapes from South Africa is limited.

K. Krüger,  H Pietersen,  Davina Saccaggi (2008)
Molecular species identification is becoming more wide-spread in diagnostics and ecological studies, particularly with regard to insects for which morphological identification is difficult or time-consuming. In this study, we describe the development and application of a single-step multiplex PCR for the identification of three mealybug species (Hemiptera: Pseudococcidae) associated with grapevine in South Africa: Planococcus ficus (vine mealybug), Planococcus citri (citrus mealybug) and Pseudococcus longispinus (longtailed mealybug). Mealybugs are pests on many commercial crops, including grapevine, in which they transmit viral diseases. Morphological identification of mealybug species is usually time-consuming, requires a high level of taxonomic expertise and usually only adult females can be identified. The single-step multiplex PCR developed here, based on the mitochondrial cytochrome c oxidase subunit 1 (CO I) gene, is rapid, reliable, sensitive, accurate and simple. The entire identification protocol (including DNA extraction, PCR and electrophoresis) can be completed in approximately four hours. Successful DNA extraction from laboratory and unparasitized field-collected individuals stored in absolute ethanol was 97%. Specimens from which DNA could be extracted were always correctly identified (100% accuracy). The technique developed is simple enough to be implemented in any molecular laboratory. The principles described here can be extended to any organism for which rapid, reliable identification is needed.

A systematic catalogue of the mealybugs of the world (Insecta: Homoptera: Coccoidea: Pseudococcidae and Putoidae) with data on geographical distribution, host plants, biology and economic importance.

Identification of the immature instars of mealybugs (Hemiptera: Pseudococcidae) found on citrus in Australia

Associate Editor: J.P. Michaud was editor of this paper