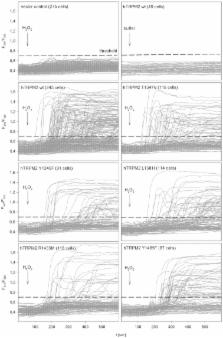 TRPM2 (transient receptor potential channel, subfamily melastatin, member 2) is a Ca 2+-permeable non-selective cation channel activated by the binding of adenosine 5′-diphosphoribose (ADPR) to its cytoplasmic NUDT9H domain (NUDT9 homology domain). Activation of TRPM2 by ADPR downstream of oxidative stress has been implicated in the pathogenesis of many human diseases, rendering TRPM2 an attractive novel target for pharmacological intervention. However, the structural basis underlying this activation is largely unknown. Since ADP (adenosine 5′-diphosphate) alone did not activate or antagonize the channel, we used a chemical biology approach employing synthetic analogues to focus on the role of the ADPR terminal ribose. All novel ADPR derivatives modified in the terminal ribose, including that with the seemingly minor change of methylating the anomeric-OH, abolished agonist activity at TRPM2. Antagonist activity improved as the terminal substituent increasingly resembled the natural ribose, indicating that gating by ADPR might require specific interactions between hydroxyl groups of the terminal ribose and the NUDT9H domain. By mutating amino acid residues of the NUDT9H domain, predicted by modelling and docking to interact with the terminal ribose, we demonstrate that abrogating hydrogen bonding of the amino acids Arg1433 and Tyr1349 interferes with activation of the channel by ADPR. Taken together, using the complementary experimental approaches of chemical modification of the ligand and site-directed mutagenesis of TRPM2, we demonstrate that channel activation critically depends on hydrogen bonding of Arg1433 and Tyr1349 with the terminal ribose. Our findings allow for a more rational design of novel TRPM2 antagonists that may ultimately lead to compounds of therapeutic potential.

Poly(ADP-ribosyl)ation reactions in the regulation of nuclear functions.

Jennifer Zhu,  Dean A. Bagley,  Andrea Fleig … (2001)
Free ADP-ribose (ADPR), a product of NAD hydrolysis and a breakdown product of the calcium-release second messenger cyclic ADPR (cADPR), has no defined role as an intracellular signalling molecule in vertebrate systems. Here we show that a 350-amino-acid protein (designated NUDT9) and a homologous domain (NUDT9 homology domain) near the carboxy terminus of the LTRPC2/TrpC7 putative cation channel both function as specific ADPR pyrophosphatases. Whole-cell and single-channel analysis of HEK-293 cells expressing LTRPC2 show that LTRPC2 functions as a calcium-permeable cation channel that is specifically gated by free ADPR. The expression of native LTRPC2 transcripts is detectable in many tissues including the U937 monocyte cell line, in which ADPR induces large cation currents (designated IADPR) that closely match those mediated by recombinant LTRPC2. These results indicate that intracellular ADPR regulates calcium entry into cells that express LTRPC2.