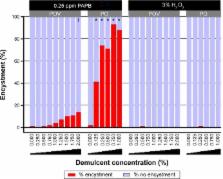 To determine whether agents which are purportedly capable of inducing encystment of Acanthamoeba can recapitulate the signal when tested in differing formulations.

Only PBS solutions with 0.25 ppm polyaminopropyl biguanide (PAPB) and increasing concentrations of PG and POV stimulated A. castellanii encystment in a dose-dependent manner, whereas PBS solutions containing 3% H 2O 2 and increasing concentrations of PG and POV did not stimulate encystment. Borate-buffered saline and PBS/citrate solutions containing PG also did not stimulate encystment. In addition, no encystment was observed after 24 hours, 7 days, or 14 days of exposures of trophozoites to one-step H 2O 2 contact lens disinfection products or related solutions.

The lack of any encystment observed when trophozoites were treated with existing or new one-step H 2O 2 contact lens care products, as well as when trophozoites were exposed to various related test solutions, confirms that Acanthamoeba encystment is a complex process which depends upon simultaneous contributions of multiple factors including buffers, biocides, and demulcents.

Acanthamoeba spp. as agents of disease in humans.

F Marciano-Cabral,  G. Cabral (2003)
Acanthamoeba spp. are free-living amebae that inhabit a variety of air, soil, and water environments. However, these amebae can also act as opportunistic as well as nonopportunistic pathogens. They are the causative agents of granulomatous amebic encephalitis and amebic keratitis and have been associated with cutaneous lesions and sinusitis. Immuno compromised individuals, including AIDS patients, are particularly susceptible to infections with Acanthamoeba. The immune defense mechanisms that operate against Acanthamoeba have not been well characterized, but it has been proposed that both innate and acquired immunity play a role. The ameba's life cycle includes an active feeding trophozoite stage and a dormant cyst stage. Trophozoites feed on bacteria, yeast, and algae. However, both trophozoites and cysts can retain viable bacteria and may serve as reservoirs for bacteria with human pathogenic potential. Diagnosis of infection includes direct microscopy of wet mounts of cerebrospinal fluid or stained smears of cerebrospinal fluid sediment, light or electron microscopy of tissues, in vitro cultivation of Acanthamoeba, and histological assessment of frozen or paraffin-embedded sections of brain or cutaneous lesion biopsy material. Immunocytochemistry, chemifluorescent dye staining, PCR, and analysis of DNA sequence variation also have been employed for laboratory diagnosis. Treatment of Acanthamoeba infections has met with mixed results. However, chlorhexidine gluconate, alone or in combination with propamidene isethionate, is effective in some patients. Furthermore, effective treatment is complicated since patients may present with underlying disease and Acanthamoeba infection may not be recognized. Since an increase in the number of cases of Acanthamoeba infections has occurred worldwide, these protozoa have become increasingly important as agents of human disease.

National Outbreak of Acanthamoeba Keratitis Associated with Use of a Contact Lens Solution, United States