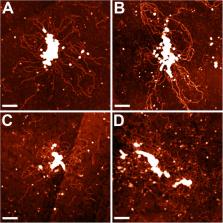 The structure and dynamics of bacterial nucleoids play important roles in regulating gene expression. Bacteria of class Mollicutes and, in particular, mycoplasmas feature extremely reduced genomes. They lack multiple structural proteins of the nucleoid, as well as regulators of gene expression. We studied the organization of Mycoplasma gallisepticum nucleoids in the stationary and exponential growth phases at the structural and protein levels. The growth phase transition results in the structural reorganization of M. gallisepticum nucleoid. In particular, it undergoes condensation and changes in the protein content. The observed changes corroborate with the previously identified global rearrangement of the transcriptional landscape in this bacterium during the growth phase transition. In addition, we identified that the glycolytic enzyme enolase functions as a nucleoid structural protein in this bacterium. It is capable of non-specific DNA binding and can form fibril-like complexes with DNA.

Julio Collado-Vides,  Agustino Martínez-Antonio (2003)
The machinery for cells to take decisions, when environmental conditions change, includes protein-DNA interactions defined by transcriptional factors and their targets around promoters. Properties of global regulators are revised attempting to reach diagnostic explicit criteria for their definition and eventual future computational identification. These include among others, the number of regulated genes, the number and type of co-regulators, the different sigma-classes of promoters and the number of transcriptional factors they regulate, the size of the evolutionary family they belong to, and the variety of conditions where they exert their control. As a consequence, global versus local regulation can be identified, as shown for Escherichia coli and eventually in other genomes.

Claudia Escher,  Lukas Reiter,  Brendan Maclean … (2012)
Multiple reaction monitoring (MRM) has recently become the method of choice for targeted quantitative measurement of proteins using mass spectrometry. The method, however, is limited in the number of peptides that can be measured in one run. This number can be markedly increased by scheduling the acquisition if the accurate retention time (RT) of each peptide is known. Here we present iRT, an empirically derived dimensionless peptide-specific value that allows for highly accurate RT prediction. The iRT of a peptide is a fixed number relative to a standard set of reference iRT-peptides that can be transferred across laboratories and chromatographic systems. We show that iRT facilitates the setup of multiplexed experiments with acquisition windows more than four times smaller compared to in silico RT predictions resulting in improved quantification accuracy. iRTs can be determined by any laboratory and shared transparently. The iRT concept has been implemented in Skyline, the most widely used software for MRM experiments.

Characterization of nucleotide pools as a function of physiological state in Escherichia coli.

Michael H Buckstein,  Harvey Rubin,  Jian-Qing He (2007)
Using a modified method that involves minimal manipulation of cells, we report new information about nucleotide pool sizes and changes throughout the Escherichia coli growth curve. Nucleotide pool sizes are critically dependent on sample manipulation and extraction methods. Centrifugation and even short (2 min) lapses in sample preparation can dramatically affect results. The measured ATP concentration at three different growth rates is at least 3 mM, well above the 0.8 mM needed to saturate the rRNA promoter P1 in vitro. Many of the pools, including ATP, GTP, and UTP, begin to decrease while the cells are still in mid-log growth. After an almost universal drop in nucleotide concentration as the cells transition from logarithmic to stationary phase, there is a "rebound" of certain nucleotides, most notably ATP, after the cells enter stationary phase, followed by a progressive decrease. UTP, in contrast, increases as the cells transition into stationary phase. The higher UTP values might be related to elevated UDP-glucose/galactose, which was found to be at higher concentrations than expected in stationary phase. dTTP is the most abundant deoxynucleoside triphosphate (dNTP) in the cell despite the fact that its precursors, UDP and UTP, are not. All dNTPs decrease through the growth curve but do not have the abrupt drop, as seen with other nucleotides when the cells transition into stationary phase.