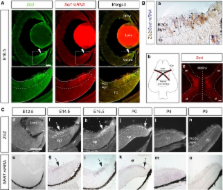 This neurodevelopmental paper reports on the transcription factor Zic2 as critical regulator of visual target refinement. Establishing that Zic2 acts through the serotonin transporter SERT provides insight into a critical element of visual circuitry.

The development of the nervous system is a time-ordered and multi-stepped process that requires neural specification, axonal navigation and arbor refinement at the target tissues. Previous studies have demonstrated that the transcription factor Zic2 is necessary and sufficient for the specification of retinal ganglion cells (RGCs) that project ipsilaterally at the optic chiasm midline. Here, we report that, in addition, Zic2 controls the refinement of eye-specific inputs in the visual targets by regulating directly the expression of the serotonin transporter (Sert), which is involved in the modulation of activity-dependent mechanisms during the wiring of sensory circuits. In agreement with these findings, RGCs that express Zic2 ectopically show defects in axonal refinement at the visual targets and respond to pharmacological blockage of Sert, whereas Zic2-negative contralateral RGCs do not. These results link, at the molecular level, early events in neural differentiation with late activity-dependent processes and propose a mechanism for the establishment of eye-specific domains at the visual targets.

The developmental role of serotonin: news from mouse molecular genetics.

Patrícia Lopes Gaspar,  Olivier Cases,  Luc Maroteaux (2003)
New genetic models that target the serotonin system show that transient alterations in serotonin homeostasis cause permanent changes to adult behaviour and modify the fine wiring of brain connections. These findings have revived a long-standing interest in the developmental role of serotonin. Molecular genetic approaches are now showing us that different serotonin receptors, acting at different developmental stages, modulate different developmental processes such as neurogenesis, apoptosis, axon branching and dendritogenesis. Our understanding of the specification of the serotonergic phenotype is improving. In addition, studies have revealed that serotonergic traits are dissociable, as there are populations of neurons that contain serotonin but do not synthesize it.

Andrew Huberman,  Marla B Feller,  Barbara Chapman (2007)
Patterns of synaptic connections in the visual system are remarkably precise. These connections dictate the receptive field properties of individual visual neurons and ultimately determine the quality of visual perception. Spontaneous neural activity is necessary for the development of various receptive field properties and visual feature maps. In recent years, attention has shifted to understanding the mechanisms by which spontaneous activity in the developing retina, lateral geniculate nucleus, and visual cortex instruct the axonal and dendritic refinements that give rise to orderly connections in the visual system. Axon guidance cues and a growing list of other molecules, including immune system factors, have also recently been implicated in visual circuit wiring. A major goal now is to determine how these molecules cooperate with spontaneous and visually evoked activity to give rise to the circuits underlying precise receptive field tuning and orderly visual maps.

Michael Andrews,  R Mössner,  A Heils … (1998)
The sodium-dependent, high affinity serotonin [5-hydroxytryptamine (5-HT)] transporter (5-HTT) provides the primary mechanism for inactivation of 5-HT after its release into the synaptic cleft. To further evaluate the function of the 5-HTT, the murine gene was disrupted by homologous recombination. Despite evidence that excess extracellular 5-HT during embryonic development, including that produced by drugs that inhibit the 5-HTT, may lead to severe craniofacial and cardiac malformations, no obvious developmental phenotype was observed in the 5-HTT-/- mice. High affinity [3H]5-HT uptake was completely absent in 5-HTT-/- mice, confirming a physiologically effective knockout of the 5-HTT gene. 5-HTT binding sites labeled with [125I] 3 beta-(4'-iodophenyl)tropan-2 beta-carboxylic acid methyl ester were reduced in a gene dose-dependent manner, with no demonstrable binding in 5-HTT-/- mutants. In adult 5-HTT-/- mice, marked reductions (60-80%) in 5-HT concentrations were measured in several brain regions. While (+)-amphetamine-induced hyperactivity did not differ across genotypes, the locomotor enhancing effects of (+)-3, 4-methylenedioxymethamphetamine, a substituted amphetamine that releases 5-HT via a transporter-dependent mechanism, was completely absent in 5-HTT-/- mutants. Together, these data suggest that the presence of a functional 5-HTT is essential for brain 5-HT homeostasis and for 3,4-methylenedioxymethamphetamine-induced hyperactivity.