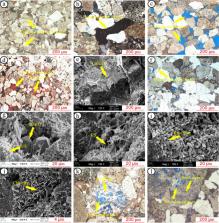 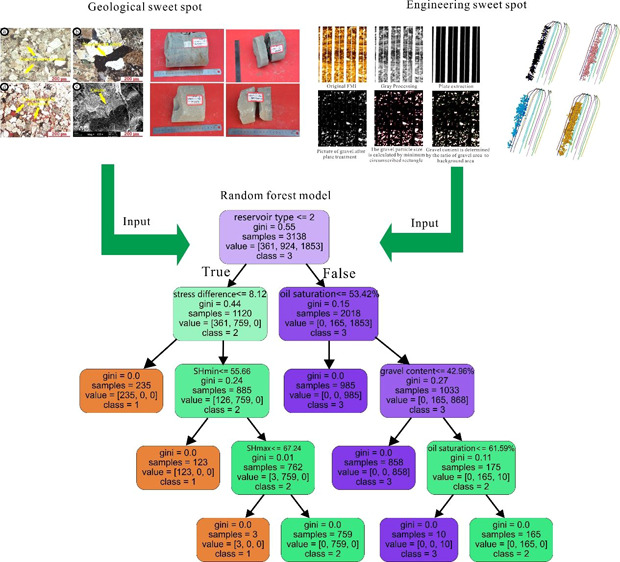 The tight conglomerate reservoir of Baikouquan formation in the MA 131 well block in the Junggar basin abounds with petroleum reserves, yet the vertical wells in this reservoir have achieved a limited development effect. The tight conglomerate reservoirs have become an important target for exploration and exploitation. The high-efficiency development scheme of a small well spacing three-dimensional (3D) staggered well pattern has been determined by a series of field tests on well pattern and well spacing development. Multistage fracturing with a horizontal well has been demonstrated as the primary development technology. The horizontal wells in the MA 131 small well spacing demonstration area have achieved significantly different development effects, and the major controlling factors for high and stable production of a single well remain unclear. In this study, we proposed an evaluation model of major productivity controlling factors of the tight conglomerate reservoir to provide a reference for oil recovery based on a random forest (RF) machine-learning algorithm. The productivity factors were investigated from two aspects: petrophysical facies that are capable of indicating the genetic mechanism of geological dessert and engineering dessert parameters forming complex fracture networks. Resultantly, the reservoir in the MA 131 well block can be classified into 12 petrophysical facies according to the sedimentary characteristics and diagenesis analysis. The mercury injection curves of a variety of petrophysical facies can be classified into four reservoir quality types. The RF model was trained on 80% of the data to predict the oil well class using the selected features as primary inputs while the remaining 20% of the data were set to test the model performance. The results indicated that the RF model produced excellent results with only 12 misclassifications across the entire data set of 627 samples that represent <2% error. The important evaluation score of the random forest algorithm model showed that the reservoir type, oil saturation, horizontal stress difference, and gravel content are the most important four indicators, with each value exceeding 15%. Brittleness and maximum horizontal stress are considered the least important indexes, with values of less than 5%. Reservoir quality and oil saturation were confirmed as the major controlling factors and material foundation for oil wells’ high and stable production. As indicated in this study, stress difference and gravel content are the major controlling factors in the formation of a complex fracture network.

Animesh Acharjee, Bjorn Kloosterman, Richard Visser … (2016)
Background In order to find genetic and metabolic pathways related to phenotypic traits of interest, we analyzed gene expression data, metabolite data obtained with GC-MS and LC-MS, proteomics data and a selected set of tuber quality phenotypic data from a diploid segregating mapping population of potato. In this study we present an approach to integrate these ~ omics data sets for the purpose of predicting phenotypic traits. This gives us networks of relatively small sets of interrelated ~ omics variables that can predict, with higher accuracy, a quality trait of interest. Results We used Random Forest regression for integrating multiple ~ omics data for prediction of four quality traits of potato: tuber flesh colour, DSC onset, tuber shape and enzymatic discoloration. For tuber flesh colour beta-carotene hydroxylase and zeaxanthin epoxidase were ranked first and forty-fourth respectively both of which have previously been associated with flesh colour in potato tubers. Combining all the significant genes, LC-peaks, GC-peaks and proteins, the variation explained was 75 %, only slightly more than what gene expression or LC-MS data explain by themselves which indicates that there are correlations among the variables across data sets. For tuber shape regressed on the gene expression, LC-MS, GC-MS and proteomics data sets separately, only gene expression data was found to explain significant variation. For DSC onset, we found 12 significant gene expression, 5 metabolite levels (GC) and 2 proteins that are associated with the trait. Using those 19 significant variables, the variation explained was 45 %. Expression QTL (eQTL) analyses showed many associations with genomic regions in chromosome 2 with also the highest explained variation compared to other chromosomes. Transcriptomics and metabolomics analysis on enzymatic discoloration after 5 min resulted in 420 significant genes and 8 significant LC metabolites, among which two were putatively identified as caffeoylquinic acid methyl ester and tyrosine. Conclusions In this study, we made a strategy for selecting and integrating multiple ~ omics data using random forest method and selected representative individual peaks for networks based on eQTL, mQTL or pQTL information. Network analysis was done to interpret how a particular trait is associated with gene expression, metabolite and protein data. Electronic supplementary material The online version of this article (doi:10.1186/s12859-016-1043-4) contains supplementary material, which is available to authorized users.

Development characteristics and orientation of tight oil and gas in China

Permits non-commercial access and re-use, provided that author attribution and integrity are maintained; but does not permit creation of adaptations or other derivative works ( https://creativecommons.org/licenses/by-nc-nd/4.0/).