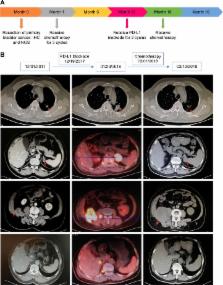 Even in cases with PD-L1-positive tumors, MDM2 gene amplification may result in failure of anti-PD-L1 immunotherapy and rapid tumor growth. Therefore, genomic profiling may identify patients at risk for hyperprogression before immunotherapy.

Patrick Hwu,  Hideo Yagita,  Weiyi Peng … (2012)
Adoptive cell transfer (ACT) is considered a promising modality for cancer treatment, but despite ongoing improvements, many patients do not experience clinical benefits. The tumor microenvironment is an important limiting factor in immunotherapy that has not been addressed fully in ACT treatments. In this study, we report that upregualtion of the immunosuppressive receptor programmed cell death-1 (PD-1) expressed on transferred T cells at the tumor site, in a murine model of ACT, compared with its expression on transferred T cells present in the peripheral blood and spleen. As PD-1 can attenuate T-cell-mediated antitumor responses, we tested whether its blockade with an anti-PD-1 antibody could enhance the antitumor activity of ACT in this model. Cotreatment with both agents increased the number of transferred T cells at the tumor site and also enhanced tumor regressions, compared with treatments with either agent alone. While anti-PD-1 did not reduce the number of immunosuppressive regulatory T cells and myeloid-derived suppressor cells present in tumor-bearing mice, we found that it increased expression of IFN-γ and CXCL10 at the tumor site. Bone marrow-transplant experiments using IFN-γR-/- mice implicated IFN-γ as a crucial nexus for controlling PD-1-mediated tumor infiltration by T cells. Taken together, our results imply that blocking the PD-1 pathway can increase IFN-γ at the tumor site, thereby increasing chemokine-dependent trafficking of immune cells into malignant disease sites.

Myeloid-derived suppressor cell development is regulated by a STAT/IRF-8 axis.

Austin Miller,  Song Liu,  Colleen S. Netherby … (2013)
Myeloid-derived suppressor cells (MDSCs) comprise immature myeloid populations produced in diverse pathologies, including neoplasia. Because MDSCs can impair antitumor immunity, these cells have emerged as a significant barrier to cancer therapy. Although much research has focused on how MDSCs promote tumor progression, it remains unclear how MDSCs develop and why the MDSC response is heavily granulocytic. Given that MDSCs are a manifestation of aberrant myelopoiesis, we hypothesized that MDSCs arise from perturbations in the regulation of interferon regulatory factor-8 (IRF-8), an integral transcriptional component of myeloid differentiation and lineage commitment. Overall, we demonstrated that (a) Irf8-deficient mice generated myeloid populations highly homologous to tumor-induced MDSCs with respect to phenotype, function, and gene expression profiles; (b) IRF-8 overexpression in mice attenuated MDSC accumulation and enhanced immunotherapeutic efficacy; (c) the MDSC-inducing factors G-CSF and GM-CSF facilitated IRF-8 downregulation via STAT3- and STAT5-dependent pathways; and (d) IRF-8 levels in MDSCs of breast cancer patients declined with increasing MDSC frequency, implicating IRF-8 as a negative regulator in human MDSC biology. Together, our results reveal a previously unrecognized role for IRF-8 expression in MDSC subset development, which may provide new avenues to target MDSCs in neoplasia.

Identification and Characterization of MEDI4736, an Antagonistic Anti-PD-L1 Monoclonal Antibody.

Ross Stewart,  Michelle Morrow,  Scott A Hammond … (2015)
Programmed cell-death 1 ligand 1 (PD-L1) is a member of the B7/CD28 family of proteins that control T-cell activation. Many tumors can upregulate expression of PD-L1, inhibiting antitumor T-cell responses and avoiding immune surveillance and elimination. We have identified and characterized MEDI4736, a human IgG1 monoclonal antibody that binds with high affinity and specificity to PD-L1 and is uniquely engineered to prevent antibody-dependent cell-mediated cytotoxicity. In vitro assays demonstrate that MEDI4736 is a potent antagonist of PD-L1 function, blocking interaction with PD-1 and CD80 to overcome inhibition of primary human T-cell activation. In vivo MEDI4736 significantly inhibits the growth of human tumors in a novel xenograft model containing coimplanted human T cells. This activity is entirely dependent on the presence of transplanted T cells, supporting the immunological mechanism of action for MEDI4736. To further determine the utility of PD-L1 blockade, an anti-mouse PD-L1 antibody was investigated in immunocompetent mice. Here, anti-mouse PD-L1 significantly improved survival of mice implanted with CT26 colorectal cancer cells. The antitumor activity of anti-PD-L1 was enhanced by combination with oxaliplatin, which resulted in increased release of HMGB1 within CT26 tumors. Taken together, our results demonstrate that inhibition of PD-L1 function can have potent antitumor activity when used as monotherapy or in combination in preclinical models, and suggest it may be a promising therapeutic approach for the treatment of cancer. MEDI4736 is currently in several clinical trials both alone and in combination with other agents, including anti-CTLA-4, anti-PD-1, and inhibitors of IDO, MEK, BRAF, and EGFR.