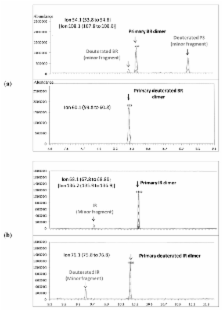 Pyrolysis(pyr)-GC/MS analysis of characteristic thermal decomposition fragments has been previously used for qualitative fingerprinting of organic sources in environmental samples. A quantitative pyr-GC/MS method based on characteristic tire polymer pyrolysis products was developed for tread particle quantification in environmental matrices including soil, sediment, and air. The feasibility of quantitative pyr-GC/MS analysis of tread was confirmed in a method evaluation study using artificial soil spiked with known amounts of cryogenically generated tread. Tread concentration determined by blinded analyses was highly correlated (r 2 ≥ 0.88) with the known tread spike concentration. Two critical refinements to the initial pyrolysis protocol were identified including use of an internal standard and quantification by the dimeric markers vinylcyclohexene and dipentene, which have good specificity for rubber polymer with no other appreciable environmental sources. A novel use of deuterated internal standards of similar polymeric structure was developed to correct the variable analyte recovery caused by sample size, matrix effects, and ion source variability. The resultant quantitative pyr-GC/MS protocol is reliable and transferable between laboratories.

Sources and properties of non-exhaust particulate matter from road traffic: a review.

Harry A. Thorpe,  Nicholas Harrison (2008)
While emissions control regulation has led to a substantial reduction in exhaust emissions from road traffic, currently non-exhaust emissions from road vehicles are unabated. These include particles from brake wear, tyre wear, road surface abrasion and resuspension in the wake of passing traffic. Quantification of the magnitude of such emissions is problematic both in the laboratory and the field and the latter depends heavily upon a knowledge of the physical and chemical properties of non-exhaust particles. This review looks at each source in turn, reviewing the available information on the source materials and particles derived from them in laboratory studies. In a final section, some of the key publications dealing with measurements in road tunnels and the roadside environment are reviewed. It is concluded that with the exception of brake dust particles which may be identified from their copper (Cu) and antimony (Sb) content, unequivocal identification of particles from other sources is likely to prove extremely difficult, either because of the lack of suitable tracer elements or compounds, or because of the interactions between sources prior to the emission process. Even in the case of brake dust, problems will arise in distinguishing directly emitted particles from those arising from resuspension of deposited brake dust from the road surface, or that derived from entrainment of polluted roadside soils, either directly or as a component of road surface dust.

Occurrence and effects of tire wear particles in the environment--a critical review and an initial risk assessment.

Anna Wik,  Göran Dave (2009)
This review summarizes the existing knowledge on the occurrence of tire wear particles in the environment, and their ecotoxicological effects. A meta-analysis on tire components in the environment revealed that tire wear particles are present in all environmental compartments, including air, water, soils/sediments, and biota. The maximum Predicted Environmental Concentrations (PECs) of tire wear particles in surface waters range from 0.03 to 56 mg l(-1) and the maximum PECs in sediments range from 0.3 to 155 g kg(-1) d.w. The results from our previous long-term studies with Ceriodaphnia dubia and Pseudokirchneriella subcapitata were used to derive Predicted No Effect Concentrations (PNECs). The upper ranges for PEC/PNEC ratios in water and sediment were >1, meaning that tire wear particles present potential risks for aquatic organisms. We suggest that management should be directed towards development and production of more environmentally friendly tires and improved road runoff treatment.

Brigitte McAtee,  Russell Finley,  Julie Panko … (2010)
The purpose of this study was to characterize the physical and chemical properties of particles generated from the interaction of tires and road surfaces. Morphology, size distribution, and chemical composition were compared between particles generated using different methods, including on-road collection, laboratory generation under simulated driving conditions, and cryogenic breaking of tread rubber. Both on-road collected and laboratory generated particles exhibited the elongated shape typical of tire wear particles, whereas tread particles were more angular. Despite similar morphology for the on-road collected and the laboratory generated particles, the former were smaller on average. It is not clear at this stage if the difference is significant to the physical and chemical behavior of the particles. The chemical composition of the particles differed, with on-road generated particles containing chemical contributions from sources other than tires, such as pavement or particulates generated from other traffic-related sources. Understanding the differences between these particles is essential in apportioning contaminant contributions to the environment between tires, roadways, and other sources, and evaluating the representativeness of toxicity studies using different types of particulate generated.