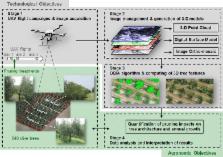 Tree pruning is a costly practice with important implications for crop harvest and nutrition, pest and disease control, soil protection and irrigation strategies. Investigations on tree pruning usually involve tedious on-ground measurements of the primary tree crown dimensions, which also might generate inconsistent results due to the irregular geometry of the trees. As an alternative to intensive field-work, this study shows a innovative procedure based on combining unmanned aerial vehicle (UAV) technology and advanced object-based image analysis (OBIA) methodology for multi-temporal three-dimensional (3D) monitoring of hundreds of olive trees that were pruned with three different strategies (traditional, adapted and mechanical pruning). The UAV images were collected before pruning, after pruning and a year after pruning, and the impacts of each pruning treatment on the projected canopy area, tree height and crown volume of every tree were quantified and analyzed over time.

The full procedure described here automatically identified every olive tree on the orchard and computed their primary 3D dimensions on the three study dates with high accuracy in the most cases. Adapted pruning was generally the most aggressive treatment in terms of the area and volume (the trees decreased by 38.95 and 42.05% on average, respectively), followed by trees under traditional pruning (33.02 and 35.72% on average, respectively). Regarding the tree heights, mechanical pruning produced a greater decrease (12.15%), and these values were minimal for the other two treatments. The tree growth over one year was affected by the pruning severity and by the type of pruning treatment, i.e., the adapted-pruning trees experienced higher growth than the trees from the other two treatments when pruning intensity was low (<10%), similar to the traditionally pruned trees at moderate intensity (10–30%), and lower than the other trees when the pruning intensity was higher than 30% of the crown volume.

Combining UAV-based images and an OBIA procedure allowed measuring tree dimensions and quantifying the impacts of three different pruning treatments on hundreds of trees with minimal field work. Tree foliage losses and annual canopy growth showed different trends as affected by the type and severity of the pruning treatments. Additionally, this technology offers valuable geo-spatial information for designing site-specific crop management strategies in the context of precision agriculture, with the consequent economic and environmental benefits. 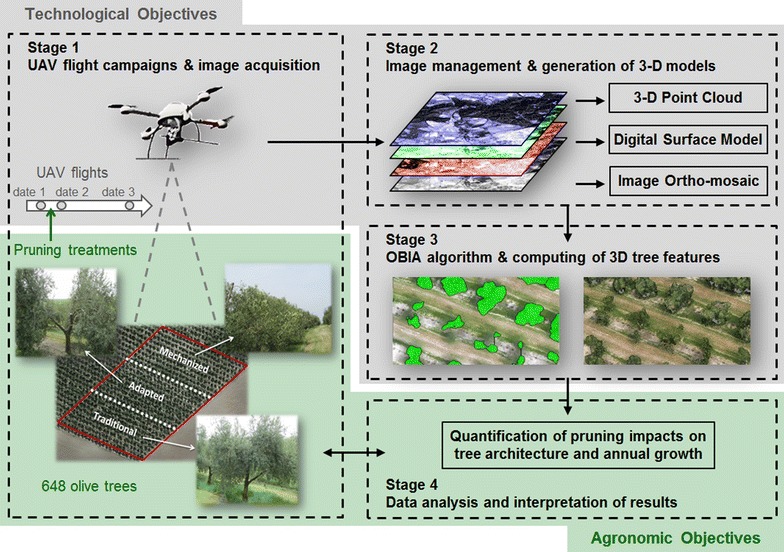 The application of small unmanned aerial systems for precision agriculture: a review

Thomas Blaschke,  Geoffrey Hay,  Maggi Kelly … (2014)
The amount of scientific literature on (Geographic) Object-based Image Analysis – GEOBIA has been and still is sharply increasing. These approaches to analysing imagery have antecedents in earlier research on image segmentation and use GIS-like spatial analysis within classification and feature extraction approaches. This article investigates these development and its implications and asks whether or not this is a new paradigm in remote sensing and Geographic Information Science (GIScience). We first discuss several limitations of prevailing per-pixel methods when applied to high resolution images. Then we explore the paradigm concept developed by Kuhn (1962) and discuss whether GEOBIA can be regarded as a paradigm according to this definition. We crystallize core concepts of GEOBIA, including the role of objects, of ontologies and the multiplicity of scales and we discuss how these conceptual developments support important methods in remote sensing such as change detection and accuracy assessment. The ramifications of the different theoretical foundations between the ‘per-pixel paradigm’ and GEOBIA are analysed, as are some of the challenges along this path from pixels, to objects, to geo-intelligence. Based on several paradigm indications as defined by Kuhn and based on an analysis of peer-reviewed scientific literature we conclude that GEOBIA is a new and evolving paradigm.