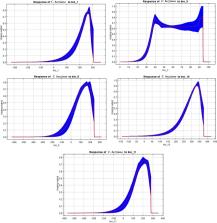 In the last few years, significant changes in climate have had a disparate effect on biodiversity. The influences of these changes are random and unpredictable. The resurgence of insect pests, especially of medical and veterinary importance, often corresponds with climate changes. The Old World screwworm, Chrysomya bezziana, is one of the most important myiasis-causing flies that parasitize warm-blooded animals in the Eastern Hemisphere. We used a spatial distribution modeling approach to estimate the consequences of climatic changes on the potential geographic distribution of this insect throughout the world currently and in the future. A Maxent model used occurrence data from 104 localities and 19 climatic factors to predict the suitable habitat regions throughout the world. Two representative concentration pathways 2.6 and 8.5, were used to forecast the future distribution of C. bezziana in 2050 and 2070. The Maxent model for C. bezziana provided a satisfactory result, with a high value of the Area Under Curve equal to 0.855 (±0.001). Furthermore, the True Skilled Statistics value is equal to 0.67. These values indicate the significant influence on the model of the ecology of this fly species. Jackknife test indicated that temperature variables play a significant role in C. bezziana dynamics. The resultant models indicated the areas at risk of invasion by potential serious medical/veterinary issues, especially in countries with a large livestock production.

Raymond Huey,  George Wang,  Katherine E. Dillon (2010)
Documented shifts in geographical ranges, seasonal phenology, community interactions, genetics and extinctions have been attributed to recent global warming. Many such biotic shifts have been detected at mid- to high latitudes in the Northern Hemisphere-a latitudinal pattern that is expected because warming is fastest in these regions. In contrast, shifts in tropical regions are expected to be less marked because warming is less pronounced there. However, biotic impacts of warming are mediated through physiology, and metabolic rate, which is a fundamental measure of physiological activity and ecological impact, increases exponentially rather than linearly with temperature in ectotherms. Therefore, tropical ectotherms (with warm baseline temperatures) should experience larger absolute shifts in metabolic rate than the magnitude of tropical temperature change itself would suggest, but the impact of climate warming on metabolic rate has never been quantified on a global scale. Here we show that estimated changes in terrestrial metabolic rates in the tropics are large, are equivalent in magnitude to those in the north temperate-zone regions, and are in fact far greater than those in the Arctic, even though tropical temperature change has been relatively small. Because of temperature's nonlinear effects on metabolism, tropical organisms, which constitute much of Earth's biodiversity, should be profoundly affected by recent and projected climate warming.