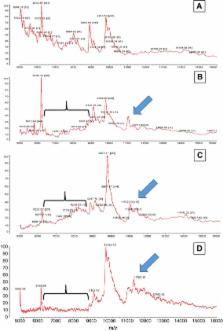 The established methods of antenatal screening for Down syndrome are based on immunoassay for a panel of maternal serum biomarkers together with ultrasound measures. Recently, genetic analysis of maternal plasma cell free (cf) DNA has begun to be used but has a number of limitations including excessive turn-around time and cost. We aimed to develop an alternative method based on urinalysis that is simple, affordable and accurate.

101 maternal urine samples sampled at 12–17 weeks gestation were taken from an archival collection of 2567 spot urines collected from women attending a prenatal screening clinic. 18 pregnancies in this set subsequently proved to be Down pregnancies. Samples were either neat urine or diluted between 10 to 1000 fold in dH 2O and subjected to matrix assisted laser desorption ionization (MALDI), time of flight (ToF) mass spectrometry (MS). Data profiles were examined in the region 6,000 to 14,000 m/z. Spectral data was normalised and quantitative characteristics of the profile were compared between Down and controls.

In Down cases there were additional spectral profile peaks at 11,000-12,000 m/z and a corresponding reduction in intensity at 6,000-8,000 m/z. The ratio of the normalised values at these two ranges completely separated the 8 Down syndrome from the 39 controls at 12–14 weeks. Discrimination was poorer at 15–17 weeks where 3 of the 10 Down syndrome cases had values within the normal range.

Direct MALDI ToF mass spectral profiling of maternal urinary has the potential for an affordable, simple, accurate and rapid alternative to current Down syndrome screening protocols.

Eugene Pergament,  Peter Benn,  Howard Cuckle (2013)
This study aimed to determine the principal factors contributing to the cost of avoiding a birth with Down syndrome by using cell-free DNA (cfDNA) to replace conventional screening. A range of unit costs were assigned to each item in the screening process. Detection rates were estimated by meta-analysis and modeling. The marginal cost associated with the detection of additional cases using cfDNA was estimated from the difference in average costs divided by the difference in detection. The main factor was the unit cost of cfDNA testing. For example, replacing a combined test costing $150 with 3% false-positive rate and invasive testing at $1000, by cfDNA tests at $2000, $1500, $1000, and $500, the marginal cost is $8.0, $5.8, $3.6, and $1.4m, respectively. Costs were lower when replacing a quadruple test and higher for a 5% false-positive rate, but the relative importance of cfDNA unit cost was unchanged. A contingent policy whereby 10% to 20% women were selected for cfDNA testing by conventional screening was considerably more cost-efficient. Costs were sensitive to cfDNA uptake. Universal cfDNA screening for Down syndrome will only become affordable by public health purchasers if costs fall substantially. Until this happens, the contingent use of cfDNA is recommended. © 2013 John Wiley & Sons, Ltd.

Protein glycosylation and diseases: blood and urinary oligosaccharides as markers for diagnosis and therapeutic monitoring.

G Durand,  N Seta (2000)
N- and O-oligosaccharide variants on glycoproteins (glycoforms) can lead to alterations in protein activity or function that may manifest themselves as overt disease. This review summarizes those diseases that are known to be the result of an inherited or acquired glycoprotein oligosaccharide structural alteration and that are diagnosed in blood or urine by chemical characterization of that oligosaccharide alteration. The biochemical synthesis steps and catabolic pathways important in determining glycoprotein function are outlined with emphasis on alterations that lead to modified function. Clinical and biochemical aspects of the diagnosis are described for inherited diseases such as I-cell disease, congenital disorders of glycosylation, leukocyte adhesion deficiency type II, hereditary erythroblastic multinuclearity with a positive acidified serum test, and Wiskott-Aldrich syndrome. We also review the laboratory use of measurements of glycoforms related to acquired diseases such as alcoholism and cancer. Identification of glycoprotein glycoforms is becoming an increasingly important laboratory contribution to the diagnosis and management of human diseases as more diseases are found to result from glycan structural alterations.

Analysis of cell-free DNA in maternal blood in screening for aneuploidies: meta-analysis.