Considerations for the Use of Human Participants in Vector Biology Research: A Tool for Investigators and Regulators 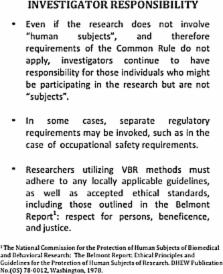 A thorough search of the existing literature has revealed that there are currently no published recommendations or guidelines for the interpretation of US regulations on the use of human participants in vector biology research (VBR). An informal survey of vector biologists has indicated that issues related to human participation in vector research have been largely debated by academic, national, and local Institutional Review Boards (IRBs) in the countries where the research is being conducted, and that interpretations and subsequent requirements made by these IRBs have varied widely. This document is intended to provide investigators and corresponding scientific and ethical review committee members an introduction to VBR methods involving human participation and the legal and ethical framework in which such studies are conducted with a focus on US Federal Regulations. It is also intended to provide a common perspective for guiding researchers, IRB members, and other interested parties ( i.e., public health officials conducting routine entomological surveillance) in the interpretation of human subjects regulations pertaining to VBR.

Global malaria mortality between 1980 and 2010: a systematic analysis.

This Open Access article is distributed under the terms of the Creative Commons License ( http://creativecommons.org/licenses/by/4.0), which permits unrestricted use, distribution, and reproduction in any medium, provided the original work is properly credited.