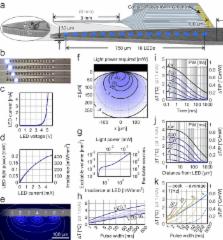 Controlling neural circuits is a powerful approach to uncover a causal link between neural activity and behaviour. Optogenetics has been widely adopted by the neuroscience community as it offers cell-type-specific perturbation with millisecond precision. However, these studies require light delivery in complex patterns with cellular-scale resolution, while covering a large volume of tissue at depth in vivo. Here we describe a novel high-density silicon-based microscale light-emitting diode (μLED) array, consisting of up to ninety-six 25 μm-diameter μLEDs emitting at a wavelength of 450 nm with a peak irradiance of 400 mW/mm 2. A width of 100 μm, tapering to a 1 μm point, and a 40 μm thickness help minimise tissue damage during insertion. Thermal properties permit a set of optogenetic operating regimes, with ~0.5 °C average temperature increase. We demonstrate depth-dependent activation of mouse neocortical neurons in vivo, offering an inexpensive novel tool for the precise manipulation of neural activity.

Interneurons of the neocortical inhibitory system.

Henry Markram, Maria Toledo-Rodriguez, Yun Wang … (2004)
Mammals adapt to a rapidly changing world because of the sophisticated cognitive functions that are supported by the neocortex. The neocortex, which forms almost 80% of the human brain, seems to have arisen from repeated duplication of a stereotypical microcircuit template with subtle specializations for different brain regions and species. The quest to unravel the blueprint of this template started more than a century ago and has revealed an immensely intricate design. The largest obstacle is the daunting variety of inhibitory interneurons that are found in the circuit. This review focuses on the organizing principles that govern the diversity of inhibitory interneurons and their circuits.

Petilla terminology: nomenclature of features of GABAergic interneurons of the cerebral cortex.

Giorgio Ascoli, Lidia Alonso-Nanclares, Stewart Anderson … (2008)
Neuroscience produces a vast amount of data from an enormous diversity of neurons. A neuronal classification system is essential to organize such data and the knowledge that is derived from them. Classification depends on the unequivocal identification of the features that distinguish one type of neuron from another. The problems inherent in this are particularly acute when studying cortical interneurons. To tackle this, we convened a representative group of researchers to agree on a set of terms to describe the anatomical, physiological and molecular features of GABAergic interneurons of the cerebral cortex. The resulting terminology might provide a stepping stone towards a future classification of these complex and heterogeneous cells. Consistent adoption will be important for the success of such an initiative, and we also encourage the active involvement of the broader scientific community in the dynamic evolution of this project.

Bernardo Rudy, Gordon Fishell, SooHyun Lee … (2011)
An understanding of the diversity of cortical GABAergic interneurons is critical to understand the function of the cerebral cortex. Recent data suggest that neurons expressing three markers, the Ca2+-binding protein parvalbumin (PV), the neuropeptide somatostatin (SST), and the ionotropic serotonin receptor 5HT3a (5HT3aR) account for nearly 100% of neocortical interneurons. Interneurons expressing each of these markers have a different embryological origin. Each group includes several types of interneurons that differ in morphological and electrophysiological properties and likely have different functions in the cortical circuit. The PV group accounts for ∼40% of GABAergic neurons and includes fast spiking basket cells and chandelier cells. The SST group, which represents ∼30% of GABAergic neurons, includes the Martinotti cells and a set of neurons that specifically target layerIV. The 5HT3aR group, which also accounts for ∼30% of the total interneuronal population, is heterogeneous and includes all of the neurons that express the neuropeptide VIP, as well as an equally numerous subgroup of neurons that do not express VIP and includes neurogliaform cells. The universal modulation of these neurons by serotonin and acetylcholine via ionotropic receptors suggests that they might be involved in shaping cortical circuits during specific brain states and behavioral contexts. Copyright © 2010 Wiley Periodicals, Inc.