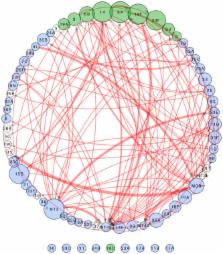 Invasive pneumococcal disease is one of the major causes of death in young children in resource poor countries. Nasopharyngeal carriage studies provide insight into the local prevalence of circulating pneumococcal serotypes. There are very few data on the concurrent carriage of multiple pneumococcal serotypes. This study aimed to identify the prevalence and serotype distribution of pneumococci carried in the nasopharynx of young healthy Nepalese children prior to the introduction of a pneumococcal conjugate vaccine using a microarray-based molecular serotyping method capable of detecting multi-serotype carriage. We conducted a cross-sectional study of healthy children aged 6 weeks to 24 months from the Kathmandu Valley, Nepal between May and October 2012. Nasopharyngeal swabs were frozen and subsequently plated on selective culture media. DNA extracts of plate sweeps of pneumococcal colonies from these cultures were analysed using a molecular serotyping microarray capable of detecting relative abundance of multiple pneumococcal serotypes. 600 children were enrolled into the study: 199 aged 6 weeks to <6 months, 202 aged 6 months to < 12 months, and 199 aged 12 month to 24 months. Typeable pneumococci were identified in 297/600 (49·5%) of samples with more than one serotype being found in 67/297 (20·2%) of these samples. The serotypes covered by the thirteen-valent pneumococcal conjugate vaccine were identified in 44·4% of samples containing typeable pneumococci. Application of a molecular serotyping approach to identification of multiple pneumococcal carriage demonstrates a substantial prevalence of co-colonisation. Continued surveillance utilising this approach following the introduction of routine use of pneumococcal conjugate vaccinates in infants will provide a more accurate understanding of vaccine efficacy against carriage and a better understanding of the dynamics of subsequent serotype and genotype replacement.

R Kohberger,  R Austrian,  Henry Shinefield … (2000)
To determine the efficacy, safety and immunogenicity of the heptavalent CRM197 pneumococcal conjugate vaccine against invasive disease caused by vaccine serotypes and to determine the effectiveness of this vaccine against clinical episodes of otitis media. The Wyeth Lederle Heptavalent CRM197 (PCV) was given to infants at 2, 4, 6 and 12 to 15 months of age in a double blind trial; 37,868 children were randomly assigned 1:1 to receive either the pneumococcal conjugate vaccine or meningococcus type C CRM197 conjugate. The primary study outcome was invasive disease caused by vaccine serotype. Other outcomes included overall impact on invasive disease regardless of serotype, effectiveness against clinical otitis media visits and episodes, impact against frequent and severe otitis media and ventilatory tube placement. In addition the serotype-specific efficacy against otitis media was estimated in an analysis of spontaneously draining ears. In the interim analysis in August, 1998, 17 of the 17 cases of invasive disease caused by vaccine serotype in fully vaccinated children and 5 of 5 of partially vaccinated cases occurred in the control group for a vaccine efficacy of 100%. Blinded case ascertainment was continued until April, 1999. As of that time 40 fully vaccinated cases of invasive disease caused by vaccine serotype had been identified, all but 1 in controls for an efficacy of 97.4% (95% confidence interval, 82.7 to 99.9%), and 52 cases, all but 3 in controls in the intent-to-treat analysis for an efficacy of 93.9% (95% confidence interval, 79.6 to 98.5%). There was no evidence of any increase of disease caused by nonvaccine serotypes. Efficacy for otitis media against visits, episodes, frequent otitis and ventilatory tube placement was 8.9, 7.0, 9.3 and 20.1% with P < 0.04 for all. In the analysis of spontaneously draining ears, serotype-specific effectiveness was 66.7%. This heptavalent pneumococcal conjugate appears to be highly effective in preventing invasive disease in young children and to have a significant impact on otitis media.

Effect of Pneumococcal Conjugate Vaccination on Serotype-Specific Carriage and Invasive Disease in England: A Cross-Sectional Study

Pathogenesis and pathophysiology of pneumococcal meningitis.

Uwe Koedel,  Hans Pfister,  W. Scheld (2002)
Until the introduction of antibiotics in the 1930s and 1940s, acute bacterial meningitis was fatal in most cases. Since then it has become curable with a variable mortality and morbidity rate for individual pathogens and patients. Neuropathological and clinical studies have shown that a fatal outcome of the disease is often due to central nervous system (CNS) complications including cerebrovascular involvement, brain oedema formation, and hydrocephalus resulting in increased intracranial pressure and seizure activity. During recent years, experimental studies with animal models have substantially increased our knowledge of the interactions of bacterial pathogens with mammalian cells and their entry into the CNS, and the complex pathophysiological mechanisms of brain dysfunction during acute bacterial meningitis. There is now a substantial body of evidence that cytokines, chemokines, proteolytic enzymes, and oxidants are involved in the inflammatory cascade that leads to tissue destruction in bacterial meningitis. Genetic targeting and/or pharmacological blockade of these pathways was beneficial in experimental bacterial meningitis. Apart from dexamethasone, these treatment strategies hold major promise for the adjunctive therapy of acute bacterial meningitis in clinical practice.

Competing Interests: AJP has previously conducted clinical trials on behalf of Oxford University that were sponsored by manufacturers of pneumococcal conjugate vaccines but does not receive any personal payments from them. The University of Oxford receives unrestricted educational grants for courses and conferences organised by AJP from vaccine manufacturers. DFK has received financial assistance from vaccine manufacturers to attend conferences. DFK receives salary support from the NIHR Oxford Biomedical Research Centre. JH has received research project grants and funding from vaccine manufacturers, but receives no personal payments for this work. This does not alter the authors’ adherence to PLOS ONE policies on sharing data and materials.

‡ These authors contributed equally to this work.