Efficacy of dexmedetomidine as an adjunct to ropivacaine in transversus abdominis plane block for paediatric laparoscopic surgeries: A double-blinded randomised trial 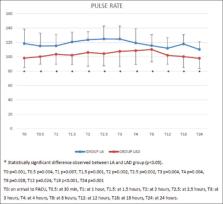 α 2 agonists have been utilised in regional blocks, but very little data is available for their use in transversus abdominis plane (TAP) block in paediatric laparoscopic (LAP) surgeries. This study investigated the analgesic effect of ropivacaine alone versus its combination with dexmedetomidine for TAP block in children undergoing LAP surgery.

Addition of dexmedetomidine to ropivacaine in TAP block prolongs the time to first analgesic requirement without a difference in the total analgesic consumption.

Dexmedetomidine as an adjuvant to ropivacaine prolongs peripheral nerve block: a volunteer study.

Moira Baeriswyl,  Kyle Kirkham,  Christian Kern … (2015)
Previous meta-analyses of the transversus abdominis plane (TAP) block have examined a maximum of 12 articles, including fewer than 650 participants, and have not examined the effect of ultrasound-guided techniques specifically. Recently, many trials that use ultrasound approaches to TAP block have been published, which report conflicting analgesic results. This meta-analysis aims to evaluate the analgesic efficacy of ultrasound-guided TAP blocks exclusively for all types of abdominal surgeries in adult patients.

Dexmedetomidine enhances the local anesthetic action of lidocaine via an alpha-2A adrenoceptor.