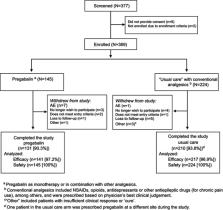 Background: Despite high prevalence of chronic neck pain in Japan and the negative impact pain has on patient’s quality of life (QoL), the therapeutic value of pregabalin for chronic neck pain with a neuropathic pain (NeP) component has not been assessed in a typical Japanese health care setting.

Methods: An 8-week, non-interventional, multicenter, observational study of Japanese adults (≥20 years) with chronic refractory cervical pain including a NeP element (for ≥12 weeks) and sleep disturbance on the Pain-Related Sleep-Interference Scale (PRSIS) ≥1 (from 0 “does not interfere with sleep” to 10 “completely interferes”). Patients received either usual care with conventional analgesics or pregabalin (150–600 mg/day) for 8 weeks. “Usual care” with analgesics or other treatment(s) was determined based on physician’s best clinical judgment. Primary endpoint was change from baseline to week 8 in PRSIS. Secondary endpoints included: change from baseline to week 4 in PRSIS, and to week 4 and 8 in pain Numerical Rating Scale (NRS; from 0 “no pain” to 10 “worst possible pain”), and on the Neck Disability Index (NDI). Other assessments of QoL were undertaken. Safety was monitored.

Conclusion: In this open-label study, pregabalin improved PRSIS and resulted in clinically meaningful reductions in pain in Japanese patients with NeP associated with chronic cervical pain.

The burden and determinants of neck pain in the general population: results of the Bone and Joint Decade 2000-2010 Task Force on Neck Pain and Its Associated Disorders.

The burden and determinants of neck pain in whiplash-associated disorders after traffic collisions: results of the Bone and Joint Decade 2000-2010 Task Force on Neck Pain and Its Associated Disorders.

J David Cassidy,  Eugene Carragee,  Sheilah Hogg-Johnson … (2008)
Best evidence synthesis. To undertake a best evidence synthesis on the burden and determinants of whiplash-associated disorders (WAD) after traffic collisions. Previous best evidence synthesis on WAD has noted a lack of evidence regarding incidence of and risk factors for WAD. Therefore there was a warrant of a reanalyze of this body of research. A systematic search of Medline was conducted. The reviewers looked for studies on neck pain and its associated disorders published 1980-2006. Each relevant study was independently and critically reviewed by rotating pairs of reviewers. Data from studies judged to have acceptable internal validity (scientifically admissible) were abstracted into evidence tables, and provide the body of the best evidence synthesis. The authors found 32 scientifically admissible studies related to the burden and determinants of WAD. In the Western world, visits to emergency rooms due to WAD have increased over the past 30 years. The annual cumulative incidence of WAD differed substantially between countries. They found that occupant seat position and collision impact direction were associated with WAD in one study. Eliminating insurance payments for pain and suffering were associated with a lower incidence of WAD injury claims in one study. Younger ages and being a female were both associated with filing claims or seeking care for WAD, although the evidence is not consistent. Preliminary evidence suggested that headrests/car seats, aimed to limiting head extension during rear-end collisions had a preventive effect on reporting WAD, especially in females. WAD after traffic collisions affects many people. Despite many years of research, the evidence regarding risk factors for WAD is sparse but seems to include personal, societal, and environmental factors. More research including, well-defined studies with accurate denominators for calculating risk, and better consideration of confounding factors, are needed.