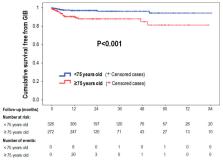 Introduction and objective: Major bleeding events in patients undergoing left atrial appendage closure (LAAC) range from 2.2 to 10.3 per 100 patient-years in different series. This study aimed to clarify the bleeding predictive factors that could influence these differences. Methods: LAAC was performed in 598 patients from the Iberian Registry II (1093 patient-years; median, 75.4 years). We conducted a multivariate analysis to identify predictive risk factors for major bleeding events. The occurrence of thromboembolic and bleeding events was compared to rates expected from CHA2DS2-VASc (congestive heart failure, hypertension, age, diabetes, stroke history, vascular disease, sex) and HAS-BLED (hypertension, abnormal renal and liver function, stroke, bleeding, labile INR, elderly, drugs or alcohol) scores. Results: Cox regression analysis revealed that age ≥75 years (HR: 2.5; 95% CI: 1.3 to 4.8; p = 0.004) and a history of gastrointestinal bleeding (GIB) (HR: 2.1; 95% CI: 1.1 to 3.9; p = 0.020) were two factors independently associated with major bleeding during follow-up. Patients aged <75 or ≥75 years had median CHA2DS2-VASc scores of 4 (IQR: 2) and 5 (IQR: 2), respectively ( p < 0.001) and HAS-BLED scores were 3 (IQR: 1) and 3 (IQR: 1) for each group ( p = 0.007). Events presented as follow-up adjusted rates according to age groups were stroke (1.2% vs. 2.9%; HR: 2.4, p = 0.12) and major bleeding (3.7 vs. 9.0 per 100 patient-years; HR: 2.4, p = 0.002). Expected major bleedings according to HAS-BLED scores were 6.2% vs. 6.6%, respectively. In patients with GIB history, major bleeding events were 6.1% patient-years (HAS-BLED score was 3.8 ± 1.1) compared to 2.7% patients-year in patients with no previous GIB history (HAS-BLED score was 3.4 ± 1.2; p = 0.029). Conclusions: In this high-risk population, GIB history and age ≥75 years are the main predictors of major bleeding events after LAAC, especially during the first year. Age seems to have a greater influence on major bleeding events than on thromboembolic risk in these patients.

Major hemorrhage and tolerability of warfarin in the first year of therapy among elderly patients with atrial fibrillation.

Elaine Hylek,  Carmella Evans-Molina,  Carol Shea … (2007)
Warfarin is effective in the prevention of stroke in atrial fibrillation but is under used in clinical care. Concerns exist that published rates of hemorrhage may not reflect real-world practice. Few patients > or = 80 years of age were enrolled in trials, and studies of prevalent use largely reflect a warfarin-tolerant subset. We sought to define the tolerability of warfarin among an elderly inception cohort with atrial fibrillation. Consecutive patients who started warfarin were identified from January 2001 to June 2003 and followed for 1 year. Patients had to be > or = 65 years of age, have established care at the study institution, and have their warfarin managed on-site. Outcomes included major hemorrhage, time to termination of warfarin, and reason for discontinuation. Of 472 patients, 32% were > or = 80 years of age, and 91% had > or = 1 stroke risk factor. The cumulative incidence of major hemorrhage for patients > or = 80 years of age was 13.1 per 100 person-years and 4.7 for those or = 80 years, and international normalized ratio (INR) > or = 4.0 were associated with increased risk despite trial-level anticoagulation control. Within the first year, 26% of patients > or = 80 years of age stopped taking warfarin. Perceived safety issues accounted for 81% of them. Rates of major hemorrhage and warfarin termination were highest among patients with CHADS2 scores (an acronym for congestive heart failure, hypertension, age > or = 75, diabetes mellitus, and prior stroke or transient ischemic attack) of > or = 3. Rates of hemorrhage derived from younger noninception cohorts underestimate the bleeding that occurs in practice. This finding coupled with the short-term tolerability of warfarin likely contributes to its underutilization. Stroke prevention among elderly patients with atrial fibrillation remains a challenging and pressing health concern.

Efficacy and safety of left atrial appendage closure with WATCHMAN in patients with or without contraindication to oral anticoagulation: 1-Year follow-up outcome data of the EWOLUTION trial.