Synthesis, antimicrobial and in vitro antitumor activities of a series of 1,2,3-thiadiazole and 1,2,3-selenadiazole derivatives 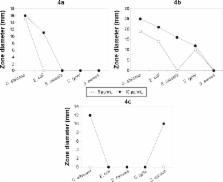 Three derivatives of substituted 1,2,3-thia- or 1,2,3-selenadiazole (4a–c) were prepared and characterized by different chemical techniques. These compounds were evaluated for their antimicrobial and antitumor activities. Compounds 4a (propenoxide derivative), 4b (carbaldehyde derivative), and 4c (benzene derivative) were active against the yeast-like fungi Candida albicans. Compound 4a was active against gram-negative Escherichia coli, and compound 4c was active against the gram-positive Staphylococcus aureus. For the antitumor activity, both compounds 4b and 4c were active against all tested tumor cell lines, namely, SW480, HCT116, C32, MV3, HMT3522, and MCF-7. The activity of compound 4c was greater than that of compound 4b and more than that of the reference antitumor 5-flourouracil against the SW480, HCT116, and MCF-7 tumor cell lines. In conclusion, a number of the prepared 1,2,3-thia- or 1,2,3-selenadiazole compounds showed promising antifungal, antibacterial, and in vitro antitumor activities. Further investigations are required to explore the mechanism by which active compound are inducing their cytotoxicity.

Anahit Penesyan,  Michael R Gillings,  Ian T. Paulsen (2015)
Bacterial resistance is a rapidly escalating threat to public health as our arsenal of effective antibiotics dwindles. Therefore, there is an urgent need for new antibiotics. Drug discovery has historically focused on bacteria growing in planktonic cultures. Many antibiotics were originally developed to target individual bacterial cells, being assessed in vitro against microorganisms in a planktonic mode of life. However, towards the end of the 20th century it became clear that many bacteria live as complex communities called biofilms in their natural habitat, and this includes habitats within a human host. The biofilm mode of life provides advantages to microorganisms, such as enhanced resistance towards environmental stresses, including antibiotic challenge. The community level resistance provided by biofilms is distinct from resistance mechanisms that operate at a cellular level, and cannot be overlooked in the development of novel strategies to combat infectious diseases. The review compares mechanisms of antibiotic resistance at cellular and community levels in the light of past and present antibiotic discovery efforts. Future perspectives on novel strategies for treatment of biofilm-related infectious diseases are explored.

Patrice Nordmann (2014)
Bacterial resistance to antibiotics has become a major source of concern for public health. Enterobacteriaceae are among the most common human pathogens, causing community-acquired as well as hospital-acquired infections. Carbapenem-resistant Enterobacteriaceae have been increasingly reported worldwide since their first identification more than 20 years ago. Three main classes of carbapenemases have been identified: Ambler class A beta-lactamase (KPC), class B (metallo-enzymes), and class D (OXA-48 type). Klebsiella pneumoniae carbapenemases (KPC) was first reported in the United States in the late 1990s and since then worldwide, with a marked endemicity in the United States, Greece, and now Italy. Carbapenemase NDM-1 (New Delhi metallo-beta-lactamase-1) is one of the most recently reported metallo-enzymes. It has spread widely in the Indian sub-continent and now worldwide. Carbapenemases of the oxacillinase-48 type (OXA-48) have been identified mostly in Mediterranean and southern European countries with a rapid spread. An early and quick identification of carbapenemase-producing infected patients, but also of carriers, is mandatory to prevent the spread of these highly resistant pathogens. The early identification of carriers and implementing of cohorting strategies is the only means to prevent nosocomial outbreaks caused by carbapenemase, with very few, if any, therapeutic options. Copyright © 2013 Elsevier Masson SAS. All rights reserved.

Evolution of antimicrobial resistance among Enterobacteriaceae (focus on extended spectrum β-lactamases and carbapenemases).